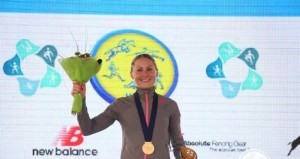 Lithuania's Laura Asadauskaitė will have the opportunity to defend her Olympic title at Rio 2016 after claiming the women’s individual crown at the International Modern Pentathlon Union (UIPM) World Cup Final in Minsk.

Asadauskaitė was always in a strong position, but it was in the final combined shootrun event where her experience and class counted as she easily overcame a seven-second handicap to cross the finish line first and secure her ticket to Brazil.

“My fencing and swimming were very good although in the riding I made one small mistake.

“I didn't feel 100 per cent in the combined event, but I am very happy to win and to know I am going to Rio next summer.

"As defending Olympic champion it is an honour to be able to go back and defend my title and I can now prepare for that."

Italy's Gloria Tocchi, who was never out of the top two, took silver, while Australia’s Chloe Esposito, who has already qualified for next year's Olympic Games, had a strong combined event to take bronze.

Tocchi and Canada's Melanie McCann made a good start with 25 wins apiece to lead the overall classification after the first event of fencing.

With one win less, Asadauskaitė sat in third place as the women headed to the pool, where a fifth place finish for Brazil’s Yane Marques, in a time of 2min 13.29sec, saw her move from fourth to first on the overall leaderboard.

Tocchi remained second overall posting a time of 2:18.41 while Asadauskaitė ensured she stayed well in contention in third spot overall with a swim of 2:19.17.

The swimming event was won by France's Elodie Clouvel in 2:06.93 to move her into fifth place on the leaderboard, while previous leader McCann placed 26th in a time of 2:21.95 to drop to fourth.

Next up was a visit to the riding arena, where Clouvel's clear round saw her take first place and move up to second on the leaderboard.

That meant Clouvel only had a very reachable five-second handicap to make up on leader Tocchi, whose 15th place finish in the riding was enough to give her pole position going into the combined event.

There was also a clear riding round from the United States' Margaux Isaksen, which saw her edge her way up the leaderboard to seventh, starting just 25 seconds behind Tocchi for the combined event.

Previous leaders from earlier events, McCann and Marques, were also still very much in contention sitting fifth and sixth respectively.

A great start in the first loop for Asadauskaitė saw her catch frontrunner Tocchi early on and she kept hold of the lead from that point to cross the line first, with the Italian finishing just behind her.

Hungary's Zsofia Foldhazi left the final shooting range in third and looked to have the bronze in the bag, but a fantastic run from Esposito saw her pass the Hungarian and pip her to third.