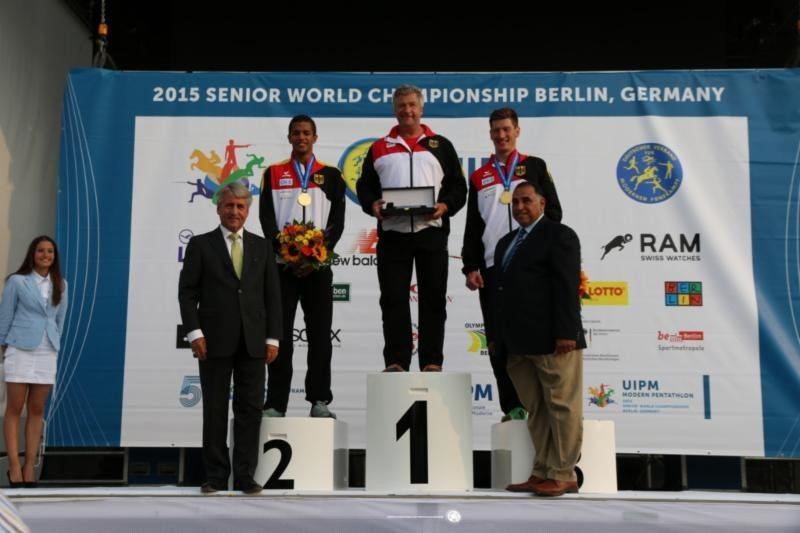 The German’s put themselves into the lead with a superb performance in the opening discipline of the event as they earned 234 points in the fencing, with Poland’s Szymon Staskiewicz and Jaroslaw Swiderski a close second just a point behind.

Nobis and Dogue showed consistency in the next two disciplines with a time of 1min 57.23sec in the swimming and solid performance in the riding keeping them in the hunt for top honours on the opening day.

It was Russia’s Alexander Kukarin and Kirill Belyakov who lead the way heading into the final run/shoot discipline having third, fourth and fifth in the opening disciplines.

Italian pairing of Nicola Benedetti and Tuullio de Santis were in hot pursuit, starting the combined event just nine seconds in arrears, but it was Nobis and Dogue who overhauled Kukarin and Belyakov for gold.

The duo began well as they cut the gap on the leaders, before dramatically taking the lead on the final section of shooting to take victory in the final event in 10:24.90.

It proved enough to take gold overall as the pairing accumulated a score of 1,544 points from the five disciplines, while Russia’s slower time in the final event of 10:43.94 cost them dearly as they finished just four points further back for the silver.

"I wasn't too secure, but it was fine because with all the people cheering him on the route and after the last corner I knew that I've done it and that I was going to cross the finishing line first,” Dogue said.

“We are both delighted."

The second day of the seven-day World Championship tomorrow is set to see the women's team relay take place, before the men's and women's individual competitions take centre stage in Germany, with athletes bidding for Rio 2016 qualification berths.