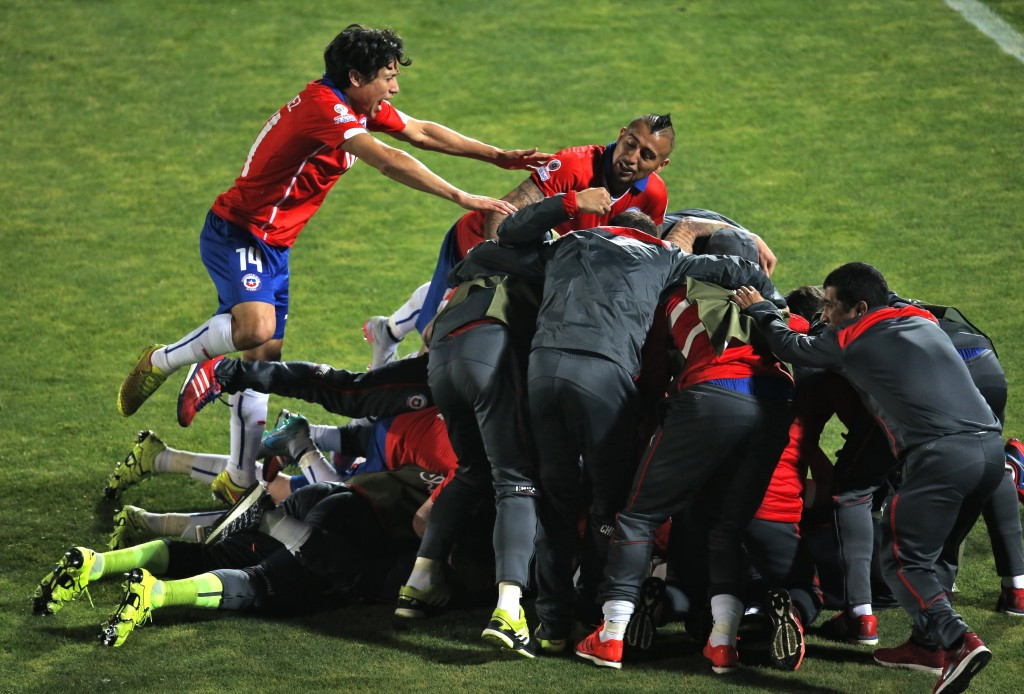 Chile booked their place in the Copa América semi-finals with a narrow 1-0 victory over defending champions Uruguay in front of their own fans at Santiago de Chile, a match that ended with the visitors ending the match with nine-men.

Having secured a dominant 5-0 victory over Bolivia in their the final group match the hosts began the quarter-final in confident fashion, but Eduardo Vargas was unable to make the most good opportunity from the edge of the area as he blazed over the crossbar.

Uruguay were sit back and try to contain the hosts leading to a first half where few clear goalscoring opportunities arose.

Long distance efforts from Chile’s Charles Aránguiz and Arturo Vidal, who last week was charged for drink-driving after crashing his Ferrari, were comfortably saved by Fernando Muslera in the Uruguay goal.

While chances were still at a premium in the second half was sparked into life by the sending off of Uruguayan forward Edison Cavani, who reacted to an off the ball incident with Gonzala Jara by striking the Chilean with his arm, and saw the referee brandishing a second yellow card followed by red.

It proved a crucial moment in the match as Chile made use of their man advantage to take the lead in the final 10 minutes of the match, with Mauricio Isla firing into the bottom corner from just inside Uruguay’s box to send the home fans wild.

The opening goal saw the match become even more heated and Uruguay’s attempts to haul themselves back into the contest were diminished by a second red card of the evening, with defender Jorge Fucile receiving his marching orders.

Fucile slid in from behind against Chile’s star man Alexis Sanchez by the touchline and was unsurprisingly shown a second yellow card, but his dismissal sparked arguments between the two benches with Uruguayan manager Óscar Tabárez also being asked to be sent to the stands.

The ugly scenes came exactly a year on from Uruguay’s striker Luis Suarez’s biting incident at the 2014 FIFA World Cup in Brazil and their conduct in the latter stages of their Copa América tie will not help to boost their damaged reputation.

After seeing out the remaining minutes Chile, who are still looking to win the first Copa América title, will now face the winner of the surprise quarter-final between Bolivia and Peru on Monday (June 29) and are set to begin as huge favourites for the encounter.