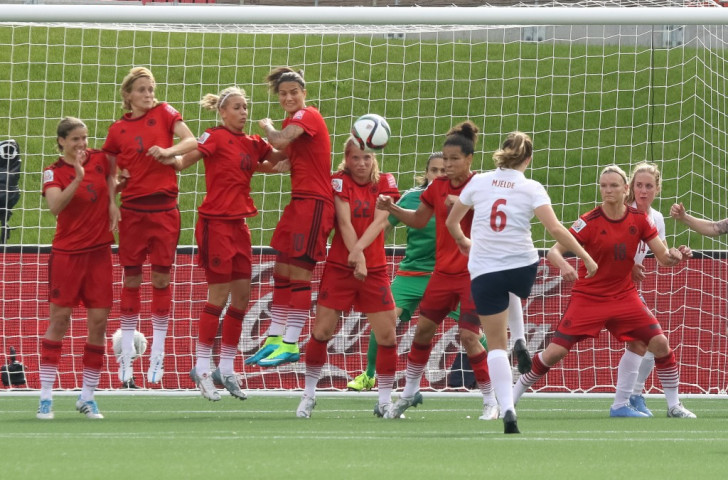 The highly-fancied German side, who came into the contest off the back of a thumping 10-0 win over Ivory Coast in their Group B opener, were quick out of the blocks and took the lead after just six minutes at the Lansdowne Stadium in Ottawa.

Norway goalkeeper Ingrid Hjelmseth could only parry Dzsenifer Marozsan’s effort from distance and Anja Mittag was on hand to give her side an early advantage with a dinked finish.

Germany then went in search of an all-important second goal as they peppered the Norwegian backline with attacks but it proved to be elusive, and Norway were able to restore parity just after the hour mark thanks to Mjelde’s beautifully-struck free-kick that found the top corner.

The Norwegian outfit then had a couple of decent chances to claim an unlikely victory but the Germans held firm as proceedings ended all square.

In the other match in the group between two tournament debutants, Thailand recovered from a goal down to beat Ivory Coast in what proved to be a thrilling match-up.

Ange Nguessan bagged an historic opener as her fourth-minute goal was the first Ivory Coast had ever scored at a World Cup, but 20 minutes later, Thailand were level as Orathai Srimanee volleyed home past the despairing Dominique Thiamale.

That gave the Thai side renewed belief and they turned the contest on its head when Srimanee scored her second of the match on the stroke of half-time.

Thanatta Chawong then effectively sealed the three points for her side by adding a third 15 minutes from time, although they had to survive a nervy ending after Josee Nahi netted a late consolation.

In Group A, China secured a last-gasp victory over The Netherlands as Lisi Wang’s injury-time winner gave her team a deserved 1-0 success at the Commonwealth Stadium in Edmonton.

After dominating for large periods without managing to break down a stern Dutch defence, Lisi latched on to a long ball and stabbed home to seal a dramatic win which sent them to second place in the group following defeat in their opening match to hosts Canada.

“Our players were under a lot of pressure after losing the first match,” China coach Hao Wei said.

“Today they showcased their true abilities and I am so proud of them.”

The Canadians also endured a frustrating outing in their second contest as they were held to a goalless draw by New Zealand.

The tournament in Canada continues tomorrow when Australia play Nigeria in Group D, while Switzerland take on Ecuador in Group C.

The United States then resume their Group D campaign against Sweden and defending champions Japan go up against Cameroon.