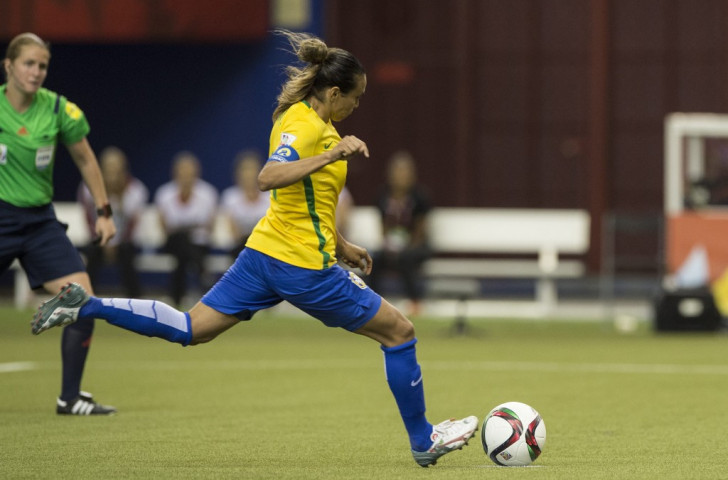 Brazilian striker Marta became the FIFA Women’s World Cup record goalscorer as her second-half penalty helped her nation to a 2-0 win over South Korea at the Olympic Stadium in Montreal.

Formiga broke the deadlock midway through the first-half as she capitalised on a mistake from Kim Doyeon, who underhit her backpass which allowed the midfielder to nip in and prod the ball home past ‘keeper Kim Jungmi.

It also proved to be a record-breaking goal for the 37-year-old as she became the oldest player to etch her name onto the scoresheet in the competition’s history.

The Brazilian fans inside the stadium had to wait until the second-half to wrap up the win as Formiga burst into the penalty area before she was fouled by Cho Sohyun.

That gave the referee no choice but to point to the spot and Marta stepped up and coolly converted the penalty to all but seal the three points.

The victory saw Brazil, who were runners-up in 2007, surge to the top of Group E after Spain were held by Costa Rica.

Both sides were making their debut on the World Cup stage and Spain got off to a quick start, taking the lead after just 13 minutes thanks to a composed finish from Vicky Losada.

Their advantage was short-lived, however, as Costa Rica rallied and equalised just a minute later when Rodriguez Cedeno rounded off a well-worked move.

Elsewhere, France moved to the summit of Group E with a hard-fought 1-0 victory over England at the Moncton Stadium in a match that lacked in quality for large periods.

England set-up in a defensive manner but they were unable to prevent Eugenie Le Sommer giving her side the lead with a perfectly-executed shot from distance just before the half-hour mark.

The English side did respond well but they could not quite restore parity and the French held on to ensure they got their campaign off to the best possible start.

In the other match in the group, Daniela Montoya rescued a point late on for Colombia with a speculative effort eight minutes from time in their clash with Mexico.

Veronica Perez’s 36th minute strike had set the Mexican team on course for their first-ever win at a World Cup but Colombia had other ideas and Montoya’s effort from distance found the net via the crossbar.

The competition is due to resume on Thursday (June 11) as Germany entertain Norway in Group B, while China face The Netherlands in Group A.

The evening's matches see Ivory Coast take on Thailand in Group B and hosts Canada go up against New Zealand.