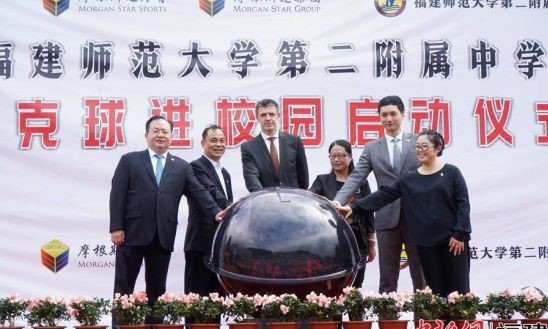 Chinese teqball has been boosted by the launch of a Teqball Campus grassroots engagement programme, aiming to build awareness and increase participation in the sport among young people prior to next year's Asian Beach Games in Sanya.

A launch ceremony for the new programme was hosted at the Second Affiliated High School of Fujian Normal University as part of plans to build passion for the sport in the south eastern province of Fujian.

MorganStar Group, an official teqball table retailer, cooperated with the school to give the students more opportunities to play the sport.

Following the launch, the programme will be rolled out into schools in the province and across China.

Bolla Szilard, Hungarian consul general in Shanghai, gave a speech at the launch event, where he highlighted the benefits of playing teqball for young people.

Others in attendance at the ceremony included Liang Mengqiao, deputy director of the education bureau of the Mawei District, and Zhu Zhenrong, President of the Second Affiliated High School of Fujian Normal University.

Teqball Campus is the latest initiative to come out of China, following September's teqball exhibition during the Beijing Olympic City Sports Culture Festival, which marked the official launch of the sport in the capital.

Teqball is set to make its debut as a medal sport at the Asian Beach Games in Sanya, pushed back to April 2021 because of the coronavirus pandemic.