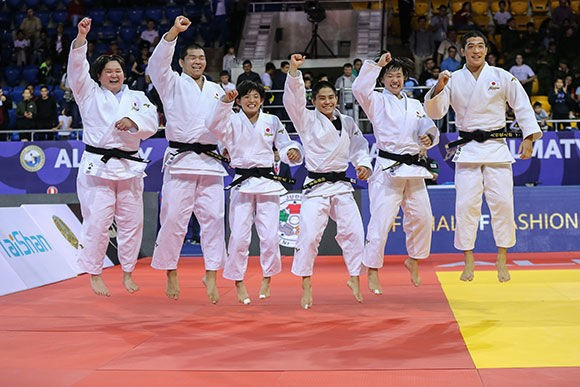 Japan have retained their mixed team title at the World Cadets Judo Championships after beating Azerbaijan 4-1 in Kazakhstan.

The Japanese raced into a 3-0 lead in the best-of-six final, in which three men and three women represent their nation at various weight divisions in the event the Baluan Sholak Sports Palace in Almaty.

The heavyweights were drawn to fight first with Ion Yamaki beating Marmin Amirli in the over-63 kilograms category before Mitsuki Sugawara defeated Huseyn Mammedov at over-81kg.

Lightweight Hikari Yoshioka was too good for Sabrina Aliyeva in the under-48kg fight, although the Azeri team pulled a point back as Kamran Suleymanov defeated Yuma Sato in the under-60kg.

Ari Yazawa brought the gold home for Japan, defeating Aytaj Gardashkhanli in the under-63kg to give Japan an insurmountable lead.

The bronze medals went to Russia, who saw off Uzbekistan 4-0, and Turkey, who defeated Brazil 4-3.

Earlier both semi-finals between Japan and Turkey and Russia versus Azerbaijan had gone to golden score contests.

Turkey battled from 3-1 down, before Munir Ertug faced Sugawara in the decider after the over-81kg fighters were drawn randomly to compete.

Following a nervous clash, Sugawara scored the critical point to keep Japan on track for gold.

In the other semi, Russia led 3-0 only for the Azeri team to pull out a magnificent comeback, Gardashkhanli beating Iana Radchenko by ippon to force golden score.

Under-48kg was chosen, and Aliyeva beat Daria Zakharova to send her team through - however, they were no match for the Japanese.