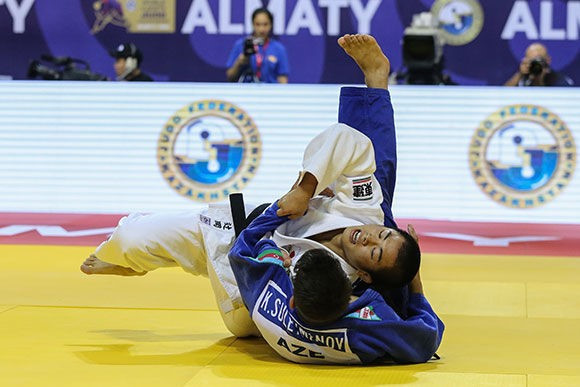 Japan recovered from missing out on gold on the opening day of the World Cadet Judo Championships with victories in two weight categories in Almaty, Kazakhstan.

The first final of the day saw world number 31 Hikari Yoshioka upset seventh-ranked Croatian Ana Viktorija to win the under-48 kilogram category in her first tournament outside Japan.

Yoshioka was immensely impressive, winning inside the first minute with two osae-komi.

Keiji, who beat home hopeful Nursultan Zaizagaliyev in the final four, overcame the Azeri judoka in a highly competitive final, winning by waza-iri.

Zaizagaliyev missed out on the medals entirely after being beaten by compatriot Marlen Adil in the repechage, while the other bronze went to Chyngyzkhan Sagynaliev of Kyrgyzstan, who defeated Azerbaijan's Turam Bayramov.

The women's under-52kg final turned into a marathon, as Veronica Toniolo of Italy and Russia's Liliia Nugaeva battled for nearly 15 minutes before a winner could be determined.

After 10 minutes and 46 seconds of golden score - following four minutes of regulation time - Nugaeva collected a third shido penalty for stepping outside the tatami, handing victory to Toniolo.

Russia did end the day with gold, however, as Abrek Naguchev eased to victory in the under-66kg.

The world number two had too much for surprise finalist Rostyslav Berezhnyi, the Ukrainian ranked 12th.