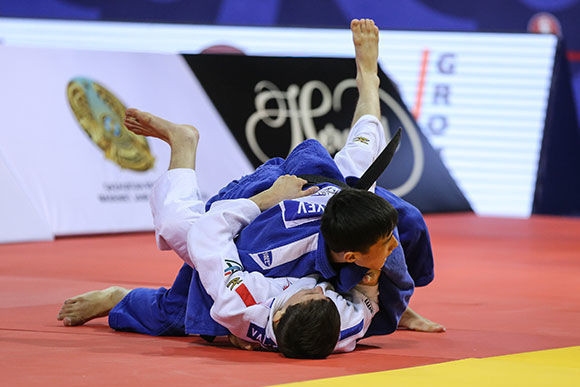 Kazakhstan's Nurkanat Serikbayev was among the winners on the opening day of the World Judo Championships Cadets in Almaty.

The home fighter won the men's under-50 kilograms category at the Baluan Sholak Sports Palace, beating France's Romain Valadier Picard in the final.

Serikbayev first scored waza-ari and completed his victory with osaekomi.

"My coach told me before the final to control his right hand and to do my judo," he said.

"This is exactly what I did.

"I managed to execute ura nage first and I finished the job with osaekomi.

"To win at home in such a nice way is just amazing."

The bronze medals were won by Ukraine's Mykyta Holoborodko and Georgia's Nika Bachiashvili.

The first gold medal of these Championships for competitors under the age of 18 was won by Hungary's Luca Mamira, who beat Italy's Chiara Antonina Dispenza in the final of the women's under-40kg category.

In a close contest, Azak took the lead with a waza-ari in the final minute and secured the title.

"I knew her strongest move is harai-makikomi," she said.

"I was prepared to face her and did exactly what I have planned with my coach."