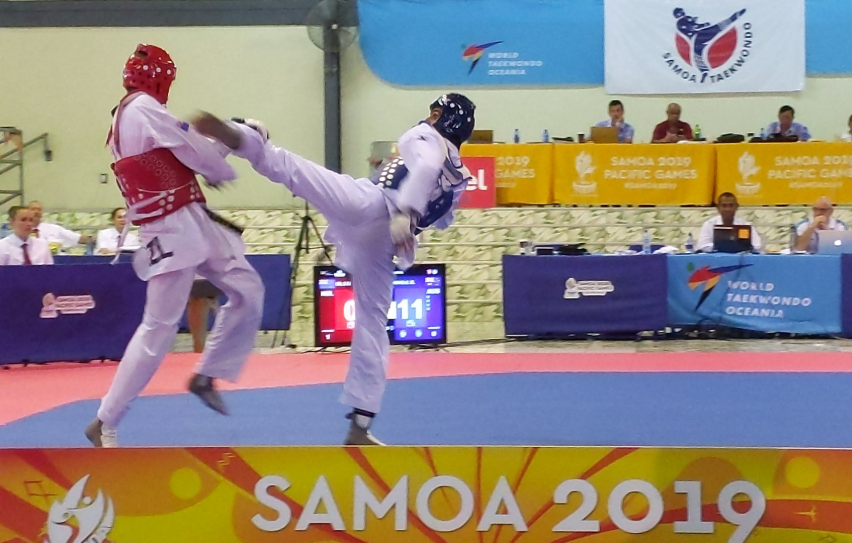 Australia won all 10 taekwondo gold medals on offer at the Pacific Games here today – including in one weight category which had only one contender.

It means Australia have won 17 of the 18 individual taekwondo golds on offer in Samoa – the other being a category in which they did not have a competitor – with the men's and women's team events to come tomorrow at the Harvest Centre in Apia.

The most bizarre gold medal was awarded to Chelsea Hobday in the women's 73 kilograms category.

She was the only entrant from any nation so was awarded gold by default.

Every fighter in these divisions earned a medal regardless of their results.

In nine of the 10 categories today – the men's 58kg being the only exception – at least one medal was awarded to a fighter who had not won a single bout.

Australia's fighters by and large eased to their gold medals.

Serena Stevens beat Rose Tona of Papua New Guinea 47-12 in the 46kg final as Shandrea Nuala of Solomon Islands was given bronze.

In the two-person 49kg category, Tamzin Christoffel was leading Fiji's Anegha Narayan 41-4 when the referee stepped in to end the fight early.

The referee also stopped the final in the 53kg to award gold to Yasmina Hibic as she led Tierra-Lynn Chargualaf of Guam 31-1.

Lindsay Gavin of New Caledonia and Cecilia Vili Magele from Samoa got bronze.

Mackenzie Singleton & Bobby Willie from PNG delivered the fight of the day at #Samoa2019! Both fought to the absolute dying second with Mac winning by 1 point.
Huge congratulations to both athletes - not only a great fight, but an inspiring display of sportsmanship #OneInSpirit pic.twitter.com/sa0KU4ZvcM

Carmen Marton was 39-0 ahead in the 57kg final against Guam's Amber Toves when the officials called an early end.

It was a similar scenario in the 62kg as Rebecca Murray beat Samoa's Taumaia Samau Mavaeao 37-2, with bronze going to Malia Paseka from Tonga and New Zealand's Victoria Arsapin.

There was just one match in the 67kg between the two entrants and Ruth Hock beat Emily Kwoaetolo of Solomon Islands 32-5.

The final in the over-73kg category between Reba Stewart and Taylor Shaw of New Zealand went the full distance before Stewart won 32-11.

Monica Maunia of Solomon Islands, who lost to Taylor, was given bronze.

Easily the most competitive final was the men's 54kg where Mackenzie Singleton was pushed all the way by Papua New Guinea's Bobby Willie before triumphing 47-46.

The final of the men's 58kg was more one-sided.

Safwan Khalil saw off New Zealand's Finn Olsen-Hennessy 22-3 as bronze medals were won by Leon Ho from Guam and Ian Tasso of Vanuatu.