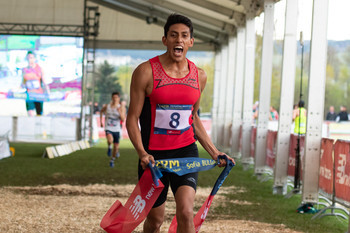 Manuel Padilla powered his way through the field to win a rare gold for Mexico in the men’s final at the International Modern Pentathlon Union (UIPM) World Cup in Sofia.

Padilla started the concluding laser run in eighth place with a handicap of 24 seconds, but after making gains on the first lap he surged into the lead and left a world-class field trailing in his wake as he finished with 1,452 points.

At the end of a thrilling final discipline, Joseph Choong of Britain managed to overtake Fabian Liebig of Germany for silver with 1448, with the latter holding off compatriot Christian Zillekens to take bronze on 1,446.

It was a massive breakthrough victory for the 27-year-old, whose only previous World Cup medal was a mixed relay bronze, although he was Pan American champion in 2017.

“We had a very competitive field here in Bulgaria with some of the best athletes in the world," said Padilla.

"For me to do my work like I did and execute to the best of my ability, this is the result.

“I was pretty happy with my results all day.

“The fencing was the best it has been in my whole career, in the semi-final and the final, and I’m very happy with my performance.

“After that I will concentrate on the Pan-American Championships where, hopefully, I can win the [NORCECA] qualifying place for the Tokyo 2020 Olympic Games.”

Its been an unforgetable day here at the the UIPM 2019 Pentathlon World Cup, Sofia. Congratulations to all the athletes who took part. 👊🏆#WorldCupSofia #Modernpentathlon pic.twitter.com/MYcxhxUIBV

Mexico has been enjoying improved results in recent years, highlighted by the Rio 2016 Olympic bronze medal won by Ismael Hernandez Uscanga, who also contributed to his country’s most recent Pentathlon World Cup gold in 2015 when he won the mixed relay alongside Tamara Vega.

Britain’s world champion James Cooke, who finished third in the swimming, had to settle for 16th with 1,404, while South Korea’s former world champion Jung Jin-hwa was 21st with 1,393.