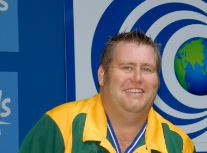 Beere will meet Malaysia's Siti Zalina Ahmad, who went through to the last four automatically after winning one of the two women's qualifying groups at the Warilla Bowls and Recreation Club in the seaside suburb of Shellharbour, New South Wales.

The men's semi-finals - one of which will be played tomorrow and the other on Wednesday (March 13) morning before the men's and women's finals - feature the only two players in the entire tournament to have unbeaten records, namely Gary Kelly of Ireland and Brendan Aquilina of Malta.

In the quarter-finals of the World Bowls World Cup, Carla Banks was up against defending champion Lucy Beere (GUE) and put in a determined performance. Beere won 10-9 11-1, but it’s been a great tournament for 20-year-old Banks who has represented her country brilliantly!? pic.twitter.com/4oudEnWxyS

Both men finished off their qualifying records with 11 wins and no defeats today, with Kelly winning his final match in section one 14-5, 10-5 against Thailand's Patsom Bryant.

Aquilina concluded his section two campaign with a 9-4, 10-7 win over Su Hong Lam of Macau.

The two play-off matches that followed saw Scotland's John Fleming earn the right to play Kelly with a 7-6, 9-4 win over Australia's Aaron Teys, playing at his home club.

But Teys' Warilla club-mate and defending champion, Northern Ireland-born Jeremy Henry, is still on course to win a seventh title having concluded his qualifying campaign with a 12-7, 13-7 win over Fiji's Kushal Pillay to finish with a record of 10 wins and one defeat.

He earned a 6-6, 8-7 play-off win over New Zealand's Seamus Curtin, who had amassed a similarly impressive record in section one, and will now face the only player who has beaten him thus far - Aquilina.