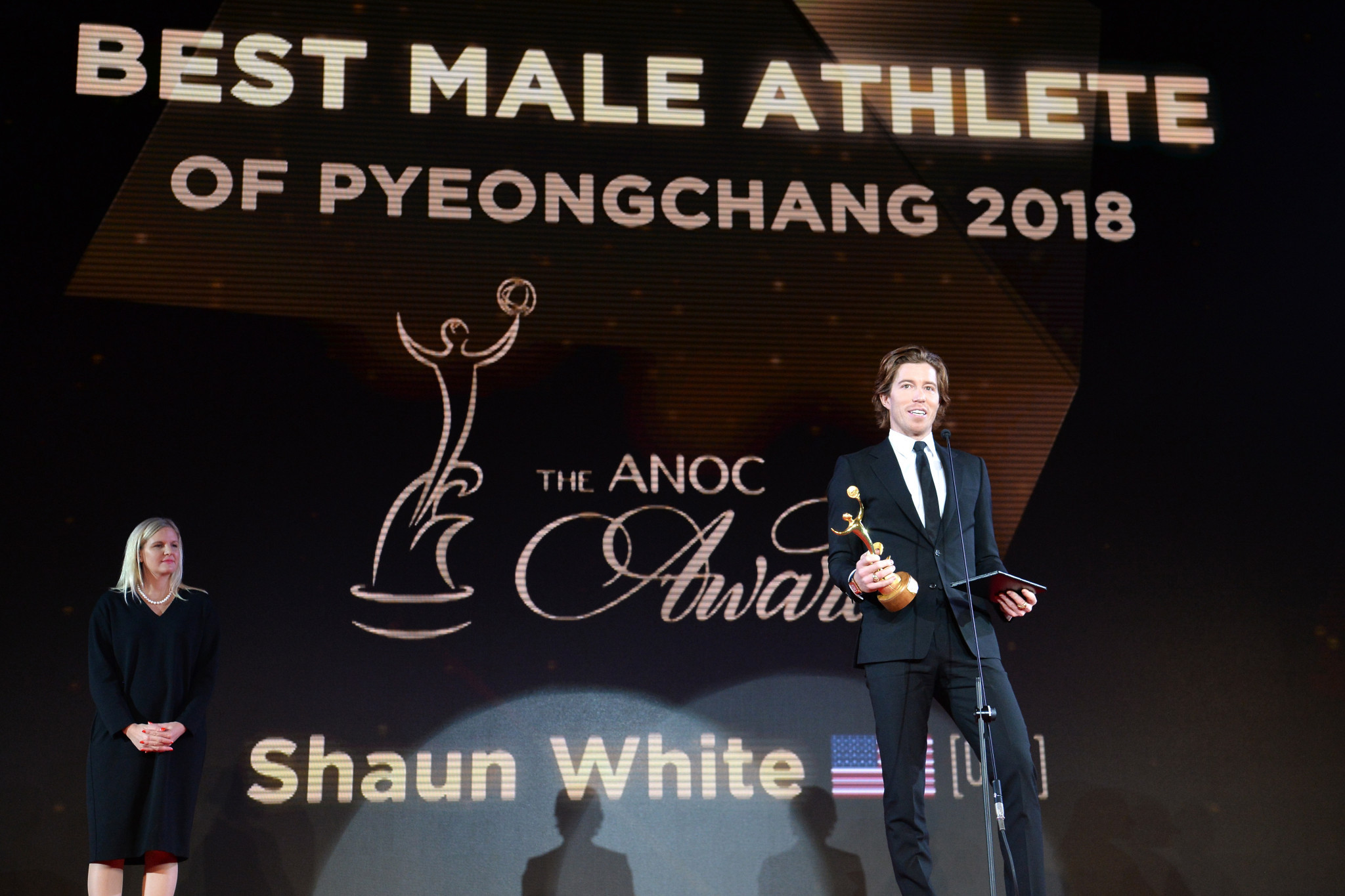 The fifth edition of the awards took place following the first day of the ANOC General Assembly, with the aim of recognising athletes, National Olympic Committees and key Olympic Movement officials.

A focus of this year’s awards was placed on the Pyeongchang 2018 Winter Olympics, with the ceremony beginning with a highlights package from the Games.

White was undoubtedly one of the biggest stars of the Games in South Korea, where the American snowboarder aimed to clinch the third Olympic title of his career.

He had trailed Ayumu Hirano heading into the final run of the men’s halfpipe final, but dramatically clinched gold with a spectacular run, which saw him leapfrog his Japanese rival.

White also had the honour of his medal being the 100th earned by the United States at the Winter Olympics.

The American, who had won halfpipe golds at Turin 2006 and Vancouver 2010, has also had a challenging 2018 along with his successes.

He was criticised when he dismissed a sexual harassment lawsuit against him as "gossip" at a Pyeongchang 2018 press conference, while the Special Olympics community claimed his Halloween costume last month was offensive.

White apologised in both cases.

Fontana was honoured for the three short track speed skating medals she earned at Pyeongchang 2018 by scooping the best female athlete honour.

Italy’s flagbearer at the Games clinched a maiden Olympic title by triumphing in the women’s 500 metres event, as well as winning 3,000m relay silver and 1,000m bronze.

She has eight Olympic medals in total in her career, making her the second most decorated Italian Winter Olympian.

Fontana had been part of the presentation of the Milan/Cortina 2026 Winter Olympic bid during the Assembly earlier today.

Sweden and the United States saw their Pyeongchang 2018 women’s and men’s curling squads pick up the best team prizes respectively.

The Swedish team claimed gold at the Games by beating hosts South Korea 8-3 in the final, while the United States secured the men’s title by overcoming Sweden 10-7.

The "Inspiring Hope Through Sport Award" was given to the unified Korean women's ice hockey team which competed at the 2018 Winter Olympics.

An agreement was reached for the North Korean team to join the host nation’s squad for the Games in an effort to promote peace between the two Koreas.

Three North Korean players featured in each of the unified team’s matches at the Games, which Pyeongchang 2018 have hailed as a “Peace Olympics”.

It came as part of several measures aimed at bringing the two nations closer together, including a joint march during the Games’ Opening Ceremony.

All countries who made their Winter Olympic debuts at the Games in the South Korean resort were recognised with Breakthrough NOCs awards.

Norway were also awarded the most successful NOC of Pyeongchang 2018 prize, with their delegation having topped the medals table with 14 golds, 14 silver and 11 bronze.

One of the stars of Norway’s Olympic past was also recognised during the evening, as cross-country skiing legend Bjørn Dæhlie secured the Outstanding Athlete award.

The Norwegian claimed eight Olympic gold medals during his career, with only compatriots Marit Bjørgen and Ole Einar Bjørndalen able to match the tally.

“I am grateful to ANOC for presenting me with this prestigious award, which adds to the very happy memories I have in Japan," Dæhlie said.

“My final Olympic Winter Games was of course in Nagano in 1998, winning my eighth Olympic gold.

“At the time, this medal made me the most successful Winter Olympic athlete in history and remains one the proudest moments of my life.

“Since retiring, I have watched with great interest as the next generation of winter athletes emerge, and I am delighted to be here to celebrate their success at the Pyeongchang 2018 Games.

“It is important for former athletes to help the development of sport in any way they can, and I will use this award as a means of inspiration to young, aspiring athletes in Norway and all over the world.”

South Korea’s Kim Yuna was honoured with the Outstanding Performance award, following the gold medal she claimed in the women's figure skating event at the Vancouver 2010 Winter Olympics.

She also won the silver medal at Sochi 2014, before becoming a key figure in the build-up to the Pyeongchang 2018 Winter Olympics.

She served as an ambassador for the Games in her home country and performed prior to lighting the Olympic Cauldron at the Opening Ceremony.

The ceremony concluded with Italy's Mario Pescante being awarded the Contribution to the Olympic Movement prize.

Pescante is departing as an IOC member at the end of the year, having reached the age limit of 80, with the Italian set to become an IOC Honorary Member.