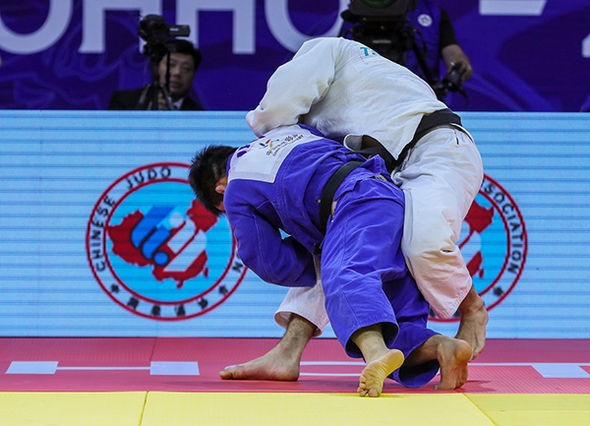 Sasaki, an IJF Grand Slam silver medallist, wasted little time as he beat the struggling Khalmurzaev by ippon within 65 seconds in the final of the division at the Inner Mongolia Stadium.

The Japanese, who made his IJF World Tour debut in Tokyo in December, proved far too strong for the World Championships bronze medallist to cement his status as a rising star in the sport.

The bronze medals in the category were secured by Lee Seung-su of South Korea and Alan Khubetsov of Russia.

Japan did not have it all their own way on day two, however, as reigning world champion Soichi Hashimoto was beaten by Korean nemesis An Chang-rim in a thrilling under-73kg gold medal encounter.

An, the current world number one, claimed victory by waza-ari against an opponent who went unbeaten from early 2016 to the end of last year.

The South Korean star was joined on the podium by Tsogtbaatar Tsend-Ochir of Mongolia and Anthony Zingg of Germany, who both earned bronze.

Sanne Van Dijke of The Netherlands overcame Kelita Zupancic of Croatia, the former world number one, to seal the women's under-70kg gold medal.

The Dutch judoka's triumph was her first IJF Grand Prix success as she scored the only point of a tense final.

World champion Chizuru Arai of Japan was forced to settle for bronze having not performed at her best in a competitive division.

The other bronze medal was claimed by Britain's Gemma Howell.

Nouchi won by default after under-23 European Championships bronze medallist Gili Sharir of Israel was unable to contest the final due to injury.

Gankhaich Bold of Mongolia and Canada's Catherine Beauchemin-Pinard were the recipients of the bronze medals.

The event is the first in the IJF's qualification process for Tokyo 2020.