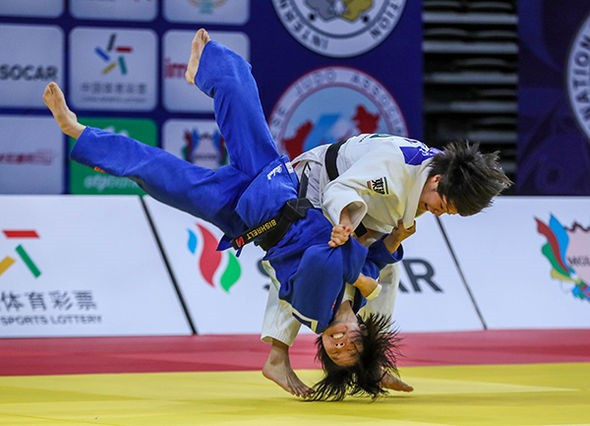 Teenage sensation Uta Abe of Japan stretched her unbeaten run to 24 contests as she claimed the gold medal in the women's under-52 kilograms division at the International Judo Federation (IJF) Grand Prix in Hohhot.

The 17-year-old recorded her fourth consecutive IJF World Tour triumph with a comfortable victory by ippon over Chinese opponent Wu Shugen at the Inner Mongolia Stadium.

The triumph continued her dominant run of form as she continues her preparations for her first senior World Championships in Baku in September.

Bronze medals in the category were clinched by Park Da-sol of South Korea and Spain's Ana Perez Box.

Olympic bronze medallist Ami Kondo of Japan topped the podium at under-48kg as she overcame South Korea's Kang Yu-jeong in the final.

Former world champion Urantsetseg Munkhbat of Mongolia secured the first bronze medal on offer, with the other going to Shira Rishony of Israel.

Christa Deguchi, the Japanese-born judoka who competes for Canada, bested team-mate Jessica Klimkait to take the top honours in the under-57kg division.

Deguchi showed Japan what they are missing with a commanding display throughout the first day of the event, winning all of her contests by ippon.

Kwon Yu-jeong of South Korea and Momo Tamaoki of Japan were the recipients of the bronze medals.

Smetov ousted his compatriot in rapid fashion as he scored ippon just 31 seconds into the encounter.

Two-time Grand Slam silver medallist Joshiro Maruyama ensured Japan enjoyed a golden ending to the opening day of the event in the Inner Mongolian capital, the first to offer qualification points for the Tokyo 2020 Olympic Games, as he beat Mikhail Puliaev of Russia to win the under-66kg title.

The bronze medals in the division were earned by Olympic silver medallist and former world champion An Baul of South Korea.

An was joined on the podium by Kazakhstan's Yeldos Zhumakanov.