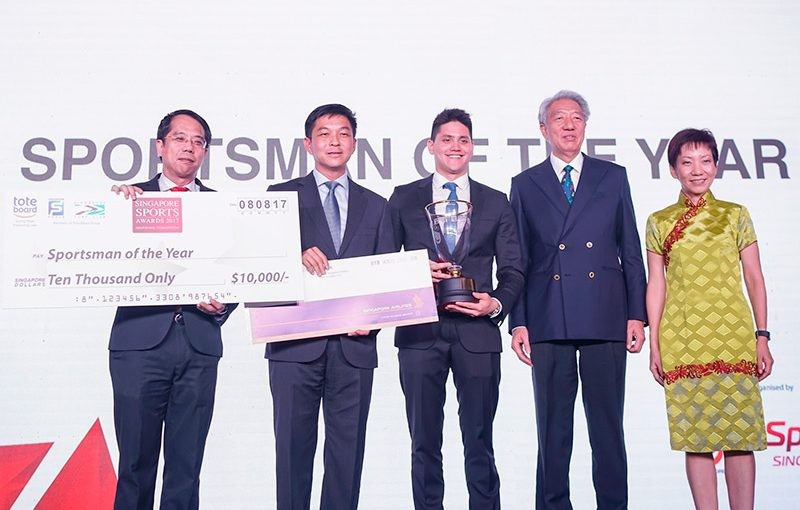 Swimmer Joseph Schooling and bowler New Hui Fen received the respective sportsman and sportswoman of the year prizes at the 2017 Singapore Sports Awards.

Organised by the Singapore National Olympic Council (SNOC) and Sport Singapore, the Awards honoured the most deserving individuals and teams in sports for 2016.

Schooling won Singapore’s first-ever Olympic gold medal when he topped the podium at Rio 2016 in the men’s 100 metres butterfly.

He has become the first athlete to win the sportsman of the year award four times, beating billiards player Peter Gilchrist and silat athlete Muhammad Shakir Bin Juanda to this year’s crown.

New was recognised as sportswoman of the year having taken home a silver medal from the World Bowling Singles Championships in Doha.

The United States' Eddie Reese, who helped guide Schooling to Rio 2016 gold, was named coach of the year.

The 76-year-old, who was not in attendance at the ceremony, was the only nominee in the category.

Among the other awards was that for the best international sports event of the year, which went to the Singapore leg of the World Rugby Sevens Series.

The ceremony was held at the Ritz-Carlton Millenia Singapore, where the SNOC also celebrated its 70th anniversary.

Deputy Prime Minister and Coordinating Minister for National Security Teo Chee Hean, patron of the SNOC, attended the event as its guest of honour.

Also present were Minister for Social and Family Development and SNOC President Tan Chuan-Jin and Minister for Culture, Community and Youth Grace Fu.

"With systematic planning, development and commitment, our athletes have been doing well in Olympic sports such as sailing, shooting, swimming, table tennis and fencing, and in sports such as bowling, cuesports, silat and wushu, which have attained success on the international stage," Teo said.