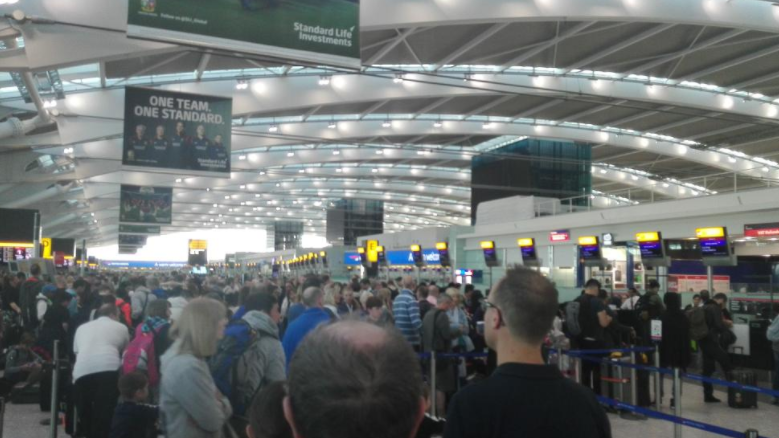 The airline grounded all flights from Heathrow and Gatwick Airports by, what they claimed, was a power failure.

More than a third of the airline’s flights from Heathrow were also cancelled today, including every one to Düsseldorf, leaving your correspondent among those stranded.

Welsh team members Chloe Thomas, Callum Evans and Daniel O’Connell were among those hoping to board a flight there at 7.30am only to be hit by repeated delays and then cancellations.

They were then forced to join a re-bookings queue which at one stage snaked the length of the entire terminal building.

Eventually, they were booked onto another flight, but from Birmingham Airport 114 miles to the north-west.

"We stood in the check-in queue, not moving, for about an hour then it came up on the screen that the flight was cancelled," Thomas told Wales Online.

"To be honest I wasn’t surprised.

"We didn’t think we would make the flight because we were in the queue for such a long time.

Beyond carnage!! Hope we make our flight for the World Championships @British_Airways #dusseldorf #bigbackhands pic.twitter.com/nQp8EuzSdd

Customer faced similar huge queues and delays waiting for baggage once flights had been cancelled.

A Para-athlete in United States national kit heading for a competition in Paris and a youth national team from Iceland were among other sportspeople affected.

It is expected that delays and cancellations could continue for several more days due to the backlog caused by the initial failure of the computer system.

Most table tennis players heading to the World Championships from other parts of Britain had, however, already arrived before the problems.

Team members, including medal winners, flew back from Brazil on a special jet called "victoRIOus".