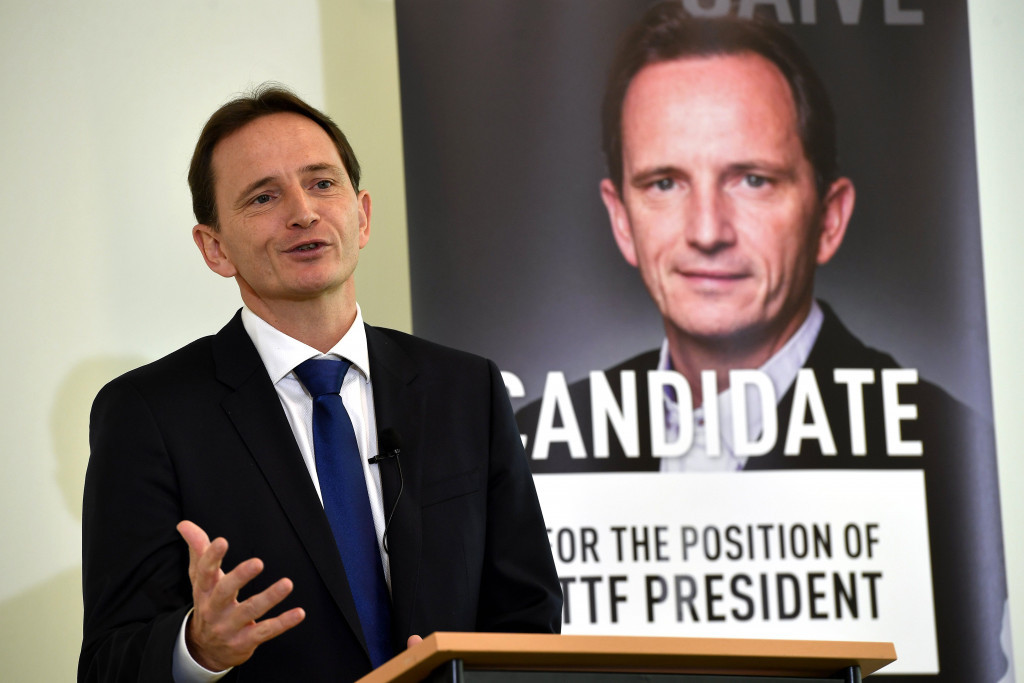 Belgium's Jean-Michel Saive has claimed he has received messages of support for his campaign to become the new President of the International Table Tennis Federation (ITTF) from delegates representing countries in at at least five of the world governing body's six continental associations.

Writing in a bulletin published on his campaign website, the former world number one revealed he had received "endorsements and support" from the Africa Table Tennis Federation Executive Committee, as well as the "large majority" of the Latin American continent.

He also claimed to have received backing from at least five of the 14 candidates standing for the role of ITTF vice-president.

Arguably most significantly, he also cited support from "candidates representing the great table tennis nations of China, Japan and Sweden".

Saive admitted, though, that these three countries have not yet made any official statement declaring their support when pressed by insidethegames.

All the others mentioned, though, are actively "supporting him and his team".

The Belgian is standing against current ITTF President, Germany's Thomas Weikert, and is considered the outsider.

Weikert  announced he had received the formal backing of 17 of the 222 voting members earlier this week.

Weikert also has the support of other key individuals, including Qatar's Khalil Al-Mohannadi, who is standing for vice-president.

Al-Mohannadi was originally standing for President before withdrawing and publicly backing Weikert.

Delegates are currently arriving in Düsseldorf for a final three days of campaigning for the election, due to place during the ITTF Annual General Meeting on Wednesday (May 31).

Weikert, as then vice-president, replaced Adham Sharara as President in 2014 when the Canadian stepped-down in order to assume a new and largely symbolic position of chair.

The German has thus never been elected as President.

Recent weeks have been marked by ITTF commercial announcements, including improved development funding and support for Member Federations.

One such example is a "strategic commercial agreement" with the sport's North American governing body, unveiled earlier this month.

There have also been escalating tensions behind the scenes, however.

ITTF chief executive Judit Farago is currently suspended on full pay until after the World Championships following an apparent breakdown in relations with Weikert.

Weikert and Sharara have also had a row in which the former accused the latter of improper interference in the election by "actively promoting" the campaign of Saive.

Sharara has not publicly confirmed who he is supporting but has made it clear that he is dissatisfied with the leadership of Weikert.

Sharara is responsible for chairing the General Meeting but has excused himself from administering over the election, handing over this responsibility to a legal counsel recommended by the ITTF auditor.

This will be Gianni Fera, an attorney-at-law from Geneva-based Mazars SA.

Weikert, however, is seemingly attempting to block this move.

The two-time World Championship silver medallist referred to the apparent banning of certain delegates from attending the General Meeting and other associated meetings, as well as the timing of commercial announcements.

"As a candidate for the position of ITTF President, I have made a very fair play campaign, never criticising any candidate, while always exposing my ideas and my project for the ITTF and for table tennis," Saive wrote.

"But I have to admit that I have observed some surprising scenarios.

"I don't want to make a list of them, but instead a promise.

"If I am elected President, I will assure all candidates to the next election the same treatment on the ITTF website, even if I believe it should not be the place for a campaign.

"I will also propose that the ITTF finance the trip for one delegate of every Member Association to the AGM the year of the election, in an equal and transparent way.

"The target will be that all Member Associations receive a visa for at least one delegate to participate at the AGM.

"I will not sign any agreements with Continents or Member Associations during the two-month period before the election.

"I will make sure that all candidates attending ITTF events have access to the VIP zone and are invited to the welcome party.

"Fairness and ethics are among the most important things on the sports field.

"It is asked of the athletes to do so: officials themselves have to set the example.

"It generates respect of and for everyone."

An ITTF Executive Committee meeting is also due to place today.

The meetings are also taking place alongside the World Championships, scheduled to begin in the German city tomorrow.