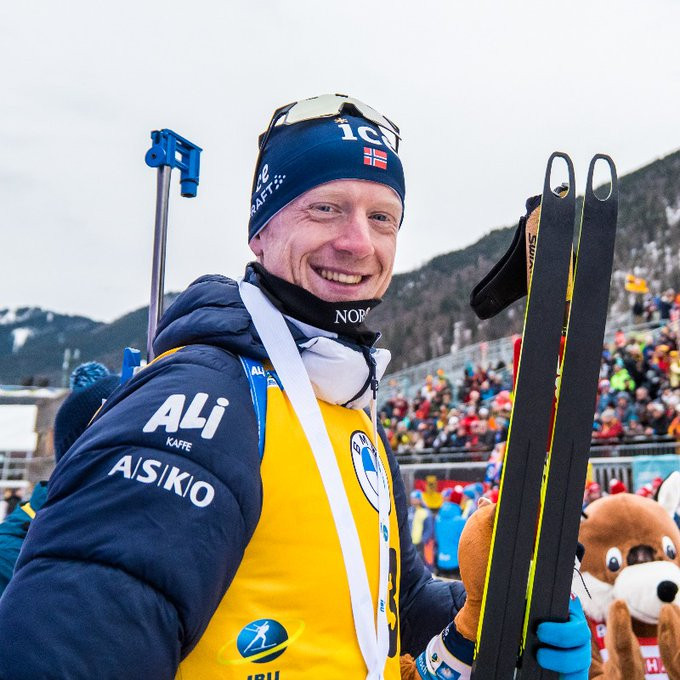 Bø’s team-mate Vetle Sjaastad Christiansen looked like he was going to triumph on the soft tracks with a confident display of shooting until he picked up a penalty at the last standing stage in the Bavarian resort.

He struggled in the final four kilometres, finally finishing 9.9 seconds behind having started the last stage with a 6.9 second lead over Bø.

Bø, wearing the yellow bib to signify his position as the overall leader in this season’s World Cup, regained the lead at 18.1km as Christiansen looked visibly fatigued entering the finishing straight, settling for second place.

It was a kind of day, a ribbon of soft, slushy snow between the green and brown grass, the wind flags flapping lightly on easy-to-shoot-on range and a balmy four degrees centigrade to test even the best, which with five Olympic gold medals, including four at Beijing 2022, Bø can certainly claim to be.

"One of the hardest races of the season with the deep snow here, tricky conditions as well with some electricity problems," he said.

"It was difficult for athletes and hopefully we will not have it for the rest of the races."

Key to Bø’s victory was his skiing, which helped him recover from the time penalties he suffered at the first and last shooting stages, leaving even him shocked at the end that he had won again.

"I was really surprised: when I was changing clothes, I checked the results on the IBU App and I was still number 1 and I didn't believe it." 😅

"It gives me a lot of confidence, but in a race like the individual with one minute per mistake, it is not so confident," he said.

"Because with three mistakes on one shooting, it is three minutes, and you are just 40th or 50th.

"For sure, I thought of going from the podium to maybe seventh or eighth position.

"I was quite sad leaving the last shooting.

"I was really surprised; I checked the results when I was changing clothes and was still number one and I did not believe it!"

Slovenia’s Jakov Fak, the only man in the field to shoot clean, finished third, 29.7 seconds behind Bø, as he claimed his first podium finish since the Antholz mass start in 2021, when he had also won the bronze medal, with a fast finish that saw him pass Sturla Holm Laegreid to prevent a Norwegian clean sweep.

Action is due to continue in Ruhpolding tomorrow with the women’s 15km individual.