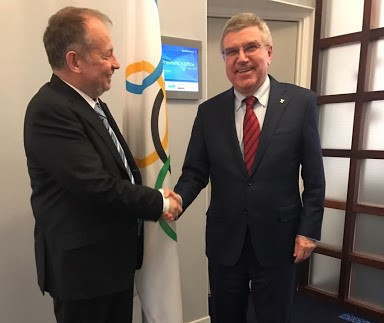 Volkov has claimed, in a letter sent to IOC President Thomas Bach, that steel manufactured by Lisin’s company, Novolipetsk (NLMK), "are used to conduct military operations on the territory of Ukraine and to kill Ukrainians."

Last month, American Congressman Steve Cohen, co-chair of the Commission on Security and Cooperation in Europe (CSCE), demanded that the United States imposed sanctions on Lisin because of his links to Russian President Vladimir Putin.

Volkov has now written to Bach to ask him to ban Lisin from standing in the ISSF election at the Congress, due to be held in Egyptian resort Sharm El-Sheikh on November 30.

"Every day in Ukraine, children, women and elderly people die from the hands of invaders," Volkov writes in a letter that insidethegames has seen.

"By all types of rockets and bombs of all categories the residential buildings of civilians were destroyed almost throughout the territory of Ukraine.

"During the war, electricity stations and other objects of critical infrastructure were destroyed in Ukraine."

Volkov blames Lisin for being involved in the death and destruction caused in Ukraine.

An investigation by Czech Republic-based RFE/RL journalists in September claimed to have uncovered connections between Lisin and Russia's military industries.

According to a non-governmental organisation that monitors Russian state contracts, one of his companies did business with a state-run institute involved in the development of nuclear weapons.

"ISSF is headed by the owner of the largest Russian metallurgical enterprise, the Novolipetsk Iron and Steel Works V. Lisin," Volkov wrote to Bach.

“He is one of dictator Vladimir Putin’s wallets.

"Lisin’s MLMK is one of the main supplier for the Russian military-industrial complex, particularly Uralvagonzavod tank manufacturing plant.

"Products of Lisin’s enterprises are used to conduct military operations on the territory of Ukraine and to kill Ukrainians."

Australia had been the only country to impose economic sanctions on Lisin until last month when Ukraine finally added him to their list of individuals it is illegal to trade with.

The US, European Union (EU) and United Kingdom have so far not sanctioned him.

But Volkov still believes that the IOC should not allow him to lead an International Federation.

"We believe that until the war in Ukraine is stopped, representatives from Russia have no right to lead any representative institutions in the International Olympic Movement," he wrote to Bach.

Lisin was elected President of the ISSF in 2018 when he defeated only rival, Italy's Luciano Rossi, 148 votes to 144 to succeed Mexico's Olegario Vàzquez Raña, who had been President for 38 years.

insidethegames revealed exclusively last month that Rossi is standing against Lisin again at this year's ISSF Congress, due to be held in Egyptian resort Sharm El-Sheikh on November 30.

Lisin, who, according to Forbes is worth $18.4 billion (£15.5 billion/€17.8 billion), has refused to step aside, unlike fellow oligarch Alisher Usmanov, who has temporarily stood down as President of the International Fencing Federation after he was sanctioned by the EU.

In June, National Federations from several countries, including Canada, the Czech Republic, Denmark, Estonia, Finland, Germany, Britain, Italy, Norway, Slovenia, Sweden and the US, sent a letter to the ISSF calling on Lisin to stand down.

But it was claimed that smaller countries who had received grants from a special $10 million (£8.5 million/€9.7 million) fund set up by Lisin using his own personal wealth following his election four years ago were blocking attempts to oust him.

ISSF secretary general, the Russian-born Alexander Ratner, has denied that Lisin’s company is involved in supplying materials to help Putin’s war in Ukraine.

"NLMK does not work with the Russian military-industrial complex and therefore never supplied the mentioned Uralvagonzavod plant, and Russian operations of NLMK are not capable of producing heavy plate steel or steel with ballistic properties and focus solely on rolled strip steel for general civilian use," Ratner told insidethegames.