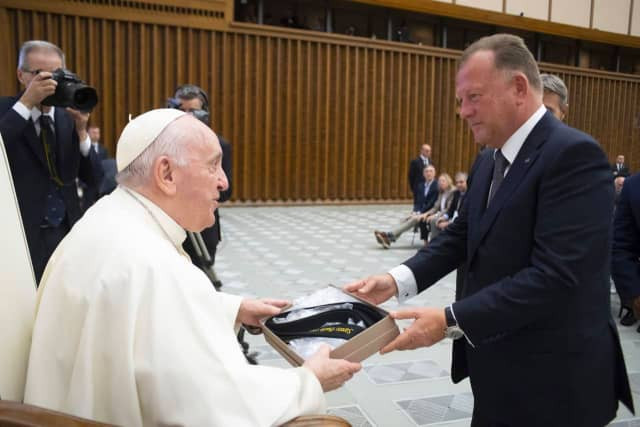 The two-day event centred on the theme "Sport For All: cohesive, accessible and tailored to each person" with 180 represents from 40 countries travelling to the Italian capital, Rome.

They staged several working sessions where as many as 106 ideas and propositions were expressed.

The propositions are expected to form the heart of discussions in the future.

Following the sessions, Pope Francis presented the signing of a joint declaration, which was also attended by International Olympic Committee President Thomas Bach.

Topics of the conference included intergenerational solidarity and mutual aid to those who suffer most, with particular focus on ensuring future developments are made without discrimination.

"Such a conference, organised in the Vatican and by the Vatican, in the presence of the Pope, is important because it is addressed to the whole of society," Vizer, who gave Pope Francis an IJF honorary black belt, said.

"In the first place, it was the youngest who were targeted and the exchanges were interesting and rich.

"As a sports organisation however, we do not only address top athletes but we work at all levels, with all ages and social categories.

"Here it was about solidarity and mutual aid, values which are dear to our judo family and which are a vehicle for peace and the development of a fairer world.

"The 'Sport For All' conference is a great initiative.

"It brings together all the major institutions in the world of sport which work to create conditions for a better society."

Randrianasolo-Niaiko, who also the vice-president of IJF, added that he was moved by Pope Francis' "humility" and believed he was a "great leader".

"His message about sport is very powerful," the Malagasy official continued.

"I have the feeling that in judo and with judo we have already done a lot and I feel much of his message to the world meets our line."

IJF academy director Envic Galea and Judo for Peace director Nicolas Messner were also in attendance at the Vatican, where they shared their experiences in their respective fields.