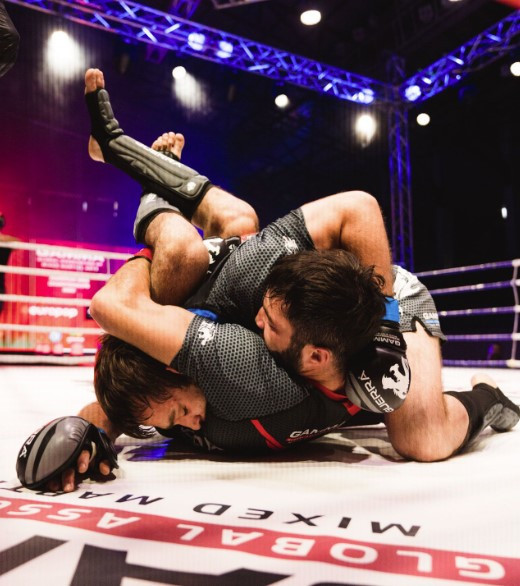 Host nation Georgia gave the home spectators every reason to walk away from the Olympic Sports Palace in a celebratory mood after topping the Global Association of Mixed Martial Arts (GAMMA) European Championships medal table in Tbilisi.

Georgia fired themselves to 16 medals in total, including six golds.

Ukraine also won the six golds for the competition.

Loladze later returned to the ring to upset defending champion and world gold medallist Karolina Chilobuszewska of Poland in the women's under-56kg class.

Nika Gudushauri followed his compatriot in standing top of the podium thanks to his victory against German Rasul Davletmurzaev in the men's 61.2kg category.

Luka Bregvadze was next to be hoisted into the air in celebration after knocking out men's under-83.9kg opponent Ferman Hasanov of Azerbaijan.

Nika Jakonia was the final Georgian to win gold following a triumph against compatriot Giorgi Aptsiauri in their men's under-70.3kg striking clash.

The day could have been better for the host if Sofiia Bagishvili had won her women's under-52.2kg final against Zejna Krantic.

Krantic was Bosnia and Herzegovina's only gold medallist at the competition and could have made it a double, but fell short of the striking title in the same weight division against Veronika Zajicova of the Czech Republic.

Ukrainian Oleksandra Karasova shocked world champion Joanna Walorska of Poland twice to become a double European champion and start her country's climb to most golds at the Championships.

She first beat her opponent in the women's under-65.8kg class before knocking her down in the striking event.

Ukraine enjoyed another double triumph through Kyrylo Kolomiets, who defeated Spaniard Klim Gusyev and Georgian Sanan Alievi in the men's under-77.1kg as well as the striking category of the same weight class.

Anatoli Oskin made it six golds with a win over compatriot Nikita Zelinskyi in the men's under-56.7kg striking division.

Azerbaijan's Yusif Aliyev was the first gold medallist of the night following his success against Germany's Ibrahim Ibrahim in the men’s under-56.7kg.

Smolkova initially bested Carmen Lopez of Spain to seal the striking title before taking down Czech Republic's Natalie Trikalova via judges' decision in the other discipline.

Poland's Iwo Baraniewski ended the tournament as the final winner after beating Latvia's Arturs Skabarnieks in the men's under-120.2kg group.