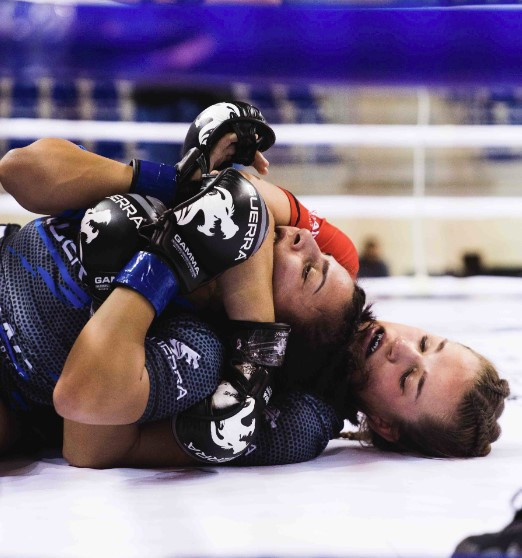 The Slovakian sealed a technical knockout win over Spain's Carmen Lopez in the women's under-61.2-kilogram category to set up a finals clash versus Czech Natalie Trikalova, who had received a bye in the Georgian capital.

Smolkova is also due to meet Lopez in the same weight class of the striking discipline after gaining her own bye.

Lopez took downed Trikalova to progress to the final.

Ukrainian Kyrylo Kolomiets could be on course for a double title win thanks to a triumph over German Aslan Bagaev in the men's under-77.1kg division and a take down of Spaniard Klim Gusyev in the striking event of the same weight group.

Kolomiets and Gusyev are due to meet again in the striking final while Georgian Sanan Alievi has a shot of winning a home title in the other event.

Iwo Baraniewski – the men's 120.2kg world champion – is the position to adding to his trophy cabinet for the weight category following his win against Georgian Giorgi Kotorashvili.

The Pole is scheduled to meet Latvian Arturs Skabarnieks, who had bettered Czech fighter David Zavoda.

Petr Striz, also representing the Czech Republic, continued his march towards a title defence of the men's undeer-65.8kg division after a unanimous decision victory against Turkey's Ahmet Ersin Topkrak.

Nika Jakonia and Giorgi Aptsiauri are scheduled to meet in an all-Georgian final in the men's under-70.3kg striking class, therefore guaranteeing a gold medal for the hosts.

The GAMMA European Championships are expected to conclude tomorrow.