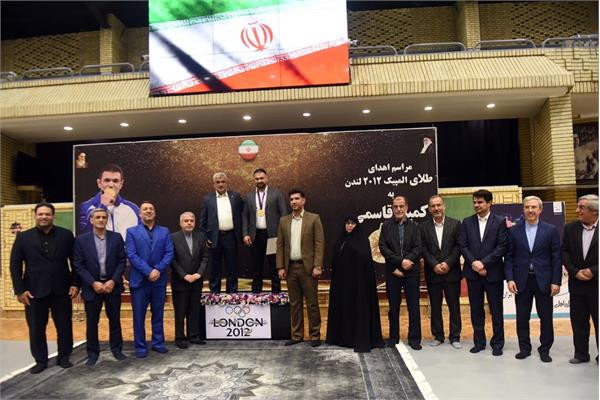 Iranian wrestler Komeil Ghasemi has received a London 2012 Olympic gold medal a decade later, after the original first- and second-placed athletes were disqualified for doping.

Ghasemi and Russia's Bilyal Makhov originally finished in the bronze-medal positions in the men's under-120 kilograms freestyle category.

However, they were bumped up to gold after Uzbekistan's Artur Taymazov and Georgia's Davit Modzmanashvili were disqualified and stripped of their medals.

In 2019, retrospective analysis of Taymazov's samples came back positive for the banned steroid oral turinabol and he was disqualified as a result.

Modzmanashvili, the original runner-up, was forced to forfeit his silver medal following a positive retest in 2019 for dehydrochlormethyltestosterone, which is an anabolic-androgenic steroid.

He was also banned for six years.

The National Olympic Committee of the Islamic Republic of Iran held a ceremony at the Shahid Sadrzadeh Hall of Wrestling in Tehran to present Ghasemi with his gold medal.

It was attended by the organisation's President Mahmoud Khosravi Vafa, members of the Executive Board, the Islamic Republic of Iran Wrestling Federation President Alireza Dabir and national team wrestlers.

Ghasemi, who retired in 2019, also has an Olympic silver medal to his name after finishing as runner-up in the men's under-125kg competition at Rio 2016.

In addition to his London 2012 forfeiture, Taymazov lost his Beijing 2008 gold medal but still holds the under-120kg Athens 2004 title as well as a Sydney 2000 silver medal in the under-130kg event.

Makhov was banned for four years in September of last year after testing positive for banned substances.

The suspension was backdated to the date of his failed test in January 2020, according to the Russian Anti-Doping Agency, and does not impact London 2012 results.