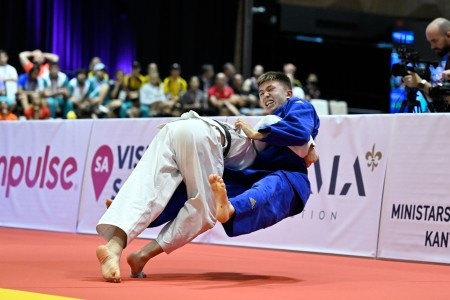 Saba Samadashvili and Davit Kareli ensured a golden double for Georgia on the second day of competition at the World Judo Cadets Championships in Sarajevo.

After France won both of the men's divisions contested yesterday, Georgia proved to be the top dogs today with Kareli and Samadashvili winning the respective men's under-60 kilogram and under-66kg titles in the capital of Bosnia and Herzegovina.

Kelvin Ray was one win away from claiming a third gold medal for France but was undone by Kareli in the final, with the Georgian producing an ippon to clinch victory with half of the contest remaining.

Samadashvili won Georgia’s second gold of the day when he defeated Uzbekistan's Shohjakhon Otaboev by ippon in the men’s under-66kg final.