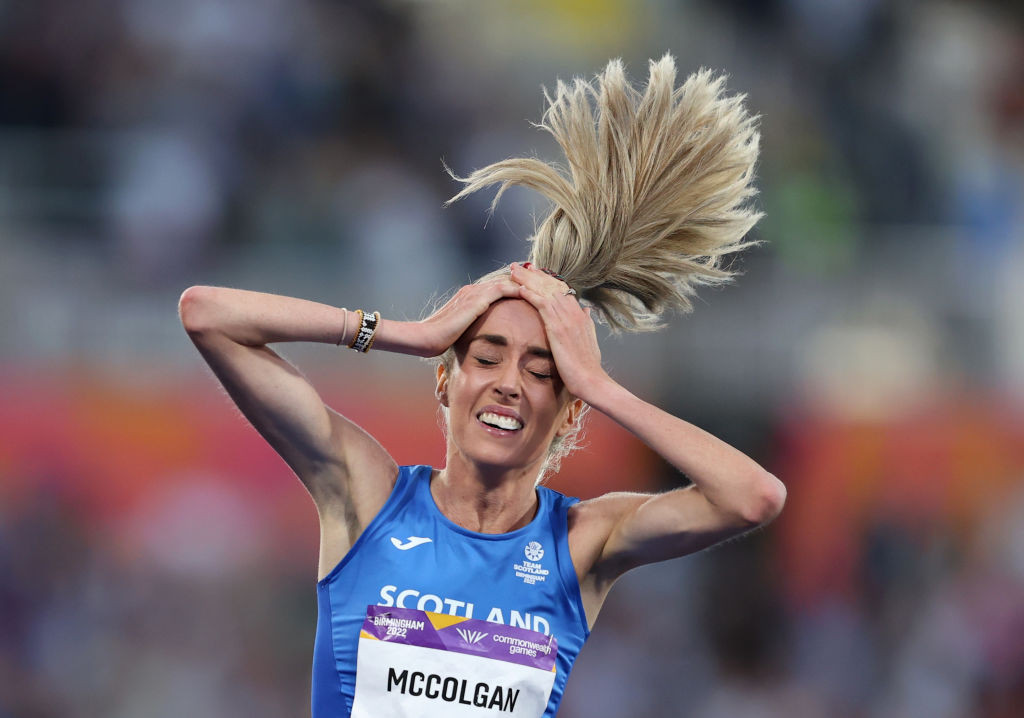 Thirty-six years after her mother, Liz, won the Commonwealth Games women's 10,000m title in Edinburgh, Eilish McColgan has done likewise in Birmingham - and in a Games record of 30min 48.60sec.

It was an emotional high-point on the second evening of athletics at Birmingham 2022 in which the men's and women's 100m titles went to the two respective favourites, Ferdinand Omanyala of Kenya and Jamaica's Elaine Thompson-Herah - although for home fans the heptathlon victory of injury-beleaguered defending champion Katarina Johnson-Thompson ran it close.

As the noise in the packed new stadium rose to towering heights, the tall 31-year-old Scot raced side-by-side with her last remaining rival, Kenya's Irene Cheptai, down the home straight before pulling away to win by two leggy strides.

"I couldn't hear myself think or breathe over that last 100 metres, the noise from the crowd was so great," McColgan said.

With two laps to go Cheptei had pushed on.

The two women - small and tall - had moved down the back straight for the second-last time in tandem, heading for the bell.

McColgan was the fastest runner in the field thanks to the personal best of 30:19.02 that she ran in Hengelo this year, putting her 11th in this year’s world list.

She duly delivered the first Scottish track gold in the Commonwealth Games since Yvonne Murray won the women’s 10,000m in 1994 Games in Victoria.

McColgan’s mother, then known by her maiden name of Liz Lynch, finished 12 seconds clear in the 1986 Commonwealth Games women’s 10,000m final, coming home to rapturous applause in the Meadowbank Stadium in 31:41.42.

That victory announced her to the wider world, and two years later she took 10,000m silver in the Seoul Olympic Games behind Olga Bondarenko of the Soviet Union.

She retained her title at the 1990 Games in Auckland and the following year, in the steamy heat of Tokyo, won the world title with one of the great solo track efforts before moving on to a road career that saw her earn gold, two silver medals a bronze in the London Marathon.

Quite an act to follow - but her daughter has worked relentlessly to lower her times and improve her performances, and this victory, which will forever be set alongside the Edinburgh version of her mother’s, was a thing of beauty that was richly celebrated by a crowd who were largely happy to be Scots for a night - or at least part of it.

The number of people who stayed behind for the women's 10,000m medal ceremony, and an emotional, bag-piped rendition of Flower of Scotland that many in the crowd sang along to, said much about the special nature of McColgan's victory.

At 31 she has finally emulated her illustrious mother and found her way to the top step of a major international podium; her happiness at so doing was radiant.

Omanyala, the fastest African sprinter, earned himself a big gold here as he won the men’s 100 metres title with aplomb, clocking 10.02sec to finish clear of South Africa’s defending champion Akani Simbine, who took silver in 10.13.

A historic bronze went to Sri Lanka’s Yupun Abeykoon in 10.14.

Having arrived in Eugene in Oregon for last months World Athletics Championships with just three hours to spare before his opening 100m heats due to visa delays, Omanyala had plenty of time to prepare here and it showed.

England's Nethaneel Mitchell-Blake, who anchored Britain to world 4x100m gold in London five years ago - and Tokyo 2020 silver before it was lost to a positive doping test for CJ Ujah - had a poor start and it rapidly became clear that he was not fully fit as he struggled home last.

Thompson-Herah added another international gold to her collection as she won here in 10.95 from Saint Lucia's Julien Alfred in 11.01, with England’s Daryll Neita taking bronze in 11.07.

Neita had run brilliantly to set the fastest qualifying time of 10.90 but could not replicate that in the final, where she recovered well from a poor start to reach the podium.

It was Thompson-Herah’s first individual Commonwealth title and it rounded off a season where she has not been at the top of her form, having to settle for 100m bronze in last month’s World Athletics Championships.

Given that her personal best was almost four seconds better than that of the athlete in silver-medal position, Kate O’Connor, the chances of Johnson-Thompson being displaced from heptathlon lead after the final event of the 800mwere long.

Second place in 2:13.93 behind the 2:11.42 run by team-mate Holly Mills proved more than enough to earn the 29-year-old Liverpudlian another gold for her collection as she finished with 5,469 points.

Norther Ireland's O'Connor, thanks to her exploits in the javelin, took silver with 5,333, and bronze went to England’s Jade O'Dowda on 5,305.

Johnson-Thompson, who ruptured her Achilles tendon in 2020 and had a hamstring problem last year, was exuberant after throwing a personal best of 44.33 metres in the javelin.

High jump gold went to New Zealand’s Hamish Kerr on countback after he and Australia's defending champion Brandon Starc had cleared a best of 2.25m.

It was a first big gold for the Kiwi, who shared world indoor bronze with Italy’s joint Olympic champion Gianmarco Tamberi earlier this year.

Shankar, based in the United States, had to appeal to the Delhi High Court to be included in India's team for Birmingham 2022 after missing the national trials.

Women's shot put gold went to Canada's Sarah Mitton in dramatic fashion as a last-round effort of 19.03m took her ahead of Jamaica's Danniel Thomas-Dodd, who won silver eventually with her third-round effort of 18.98m.

On a night when his fellow countryman had taken an unprecedented bronze in the men’s sprinting showpiece, Sri Lanka’s Palitha Halgahawela Gedara claimed silver with 44.20m.

Bronze went to another Welshman, Harrison Walsh, whose F44 best of 54.76m superseded the 54.66m thrown by England’s Dan Greaves.