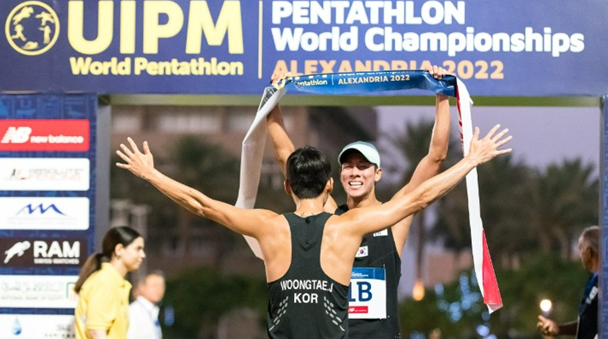 Jun and Jung came out on top in the men's relay, thanks in no small part to impressive fencing and swimming performances.

Egypt's first medal of the home World Championships was a silver.

The South Koreans took the lead in the fencing round and grew it through the swimming section to carry a 21-second advantage into the laser-run.

They had been one of seven pairs to score a perfect 300 points in the equestrian element first up.

A laser-run time of 12min 40.70sec was only ninth-fastest out of the 13 teams, but enough for the South Koreans to win.

Eight seconds back were Eslam Hamad and Ahmed Hamed representing the host nation, with Czech duo Matous Tuma and Filip Houska holding off a French charge to finish third.

"Egypt is a special country for me after I was individual world champion in 2017, and I was very happy to have another nice victory with my team-mate Jun today," Jung said.

Jun - an individual bronze medallist at last year's Olympics ad the reigning World Cup champion - and Jung were runners-up in this event at the 2021 UIPM World Championships, when a Russian Modern Pentathlon Federation team - competing as such with the nation's flag and name banned as part of anti-doping sanctions imposed on the country - won.

Russia is this year banned outright from the World Championships because of the war in Ukraine.

The women's relay is scheduled tomorrow.