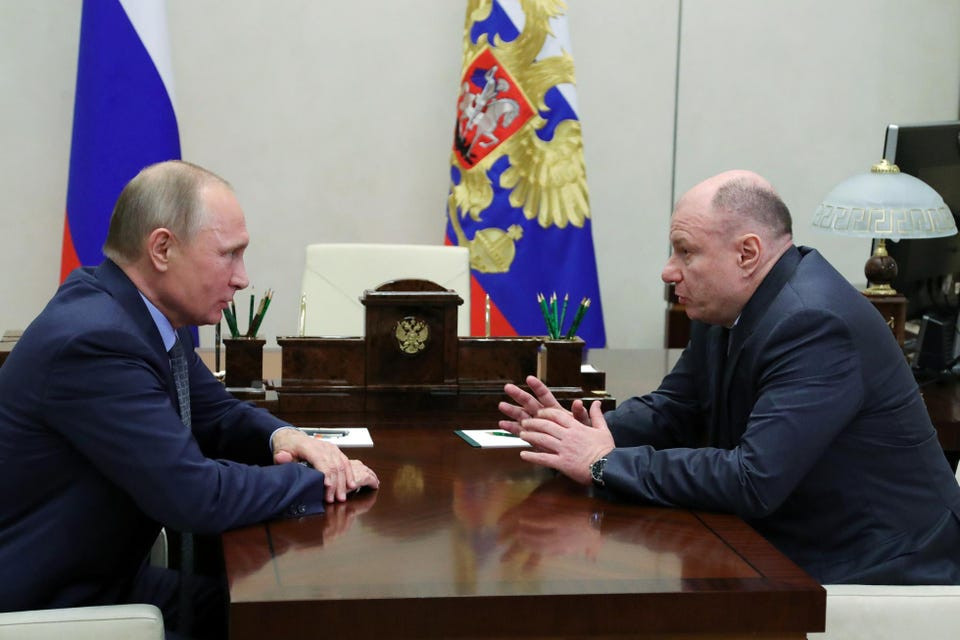 Russian oligarch Vladimir Potanin, who funded the development of the resort which staged Alpine skiing during the 2014 Winter Olympic and Paralympic Games in Sochi, has been sanctioned by the United Kingdom Government following the invasion of Ukraine.

The Foreign, Commonwealth and Development Office announced in London that Potanin, owner of the Interros conglomerate and with an estimated net worth of £13 billion (£11 billion/€12.7 billion), would face an asset freeze, travel ban, transport sanctions and a block on technical advice relating to aircraft.

Potanin, a close ally of Russian President Vladimir Putin, is the chief executive and main shareholder of Siberian mining company Norilsk Nickel, which dominates the world’s supply of nickel and palladium.

The company’s central role in global metals production meant Potanin, known as Russia's "Nickel King", had been one of the few Russian oligarchs not targeted for sanctions by western countries except Canada.

Norilsk is a crucial supplier to the automotive industry, supplying nickel for electric vehicle batteries, as well as palladium for the catalytic converters that limit harmful emissions in petrol-fuelled cars.

Europe’s stainless-steel industry is also a big buyer of its nickel.

Since the invasion of Ukraine, the 61-year-old Potanin has snapped up Rosbank from Societe Generale when the French lender exited the Russian market, before adding a 35 per cent stake in TCS Group.

"Potanin continues to amass wealth as he supports Putin’s regime, acquiring Rosbank, and shares in Tinkoff Bank in the period since Russia’s invasion of Ukraine," the UK Government press notice accompanying the announcement said.

The British sanctions list revealed Potanin had been included because he was "obtaining a benefit from or supporting the Government of Russia by owning or controlling Rosbank".

"Rosbank is carrying on business in the Russian financial services sector, which is a sector of strategic significance to the Government of Russia."

Potanin was inspired to develop the Rosa Khutor ski resort in the Mzymta valley near Sochi after skiing with Putin in Austria in 2003.

He invested more than $2 billion (£1.6 billion/£1.9 billion) into the resort after Sochi was picked in 2007 to host the Winter Olympics.

He allegedly urged Putin to approve expansion in the area to create a "Russian Courchevel", despite oppositional pressure from environmental groups who claimed it would further damage the region.

It was later shown that construction of the Rosa Khutor resort had resulted in a vast patch of forest being cut down, although Potanin had announced that construction would require "little excavation and zero logging".

Potanin also helped establish the Russian International Olympic University (RIOU) in 2009 with the Russian Government and the Russian Olympic Committee as a major legacy project of Sochi 2014.

According to the RIOU website, he remains on its Board of Trustees, whose chairman is Putin.

Potanin also has amassed one of the world’s largest privately owned collections of Olympic memorabilia.

The collection includes around 400 Olympic Games items, from the first Modern Olympics held in Athens in 1896 to the present day.

Several other leading Russian figures with connections to the Olympics have been sanctioned by Governments around the world following Putin’s invasion in February.

They include Alisher Usmanov, who has interests in several industries, including metal, mining and media, who stepped down as President of the International Fencing Federation after he was sanctioned by the EU, United States and UK.

Dmitry Chernyshenko, the President and chief executive of Sochi 2014, who is now Russia’s Deputy Prime Minister was sanctioned by the EU due to his involvement with the country’s railways.

Vladimir Lisin, the chairman of one of Russia’s biggest steel companies Novolipetsk and President of the International Sport Shooting Federation, has been sanctioned by the Australian Government but so far has not been targeted by the European Union, US or Britain.