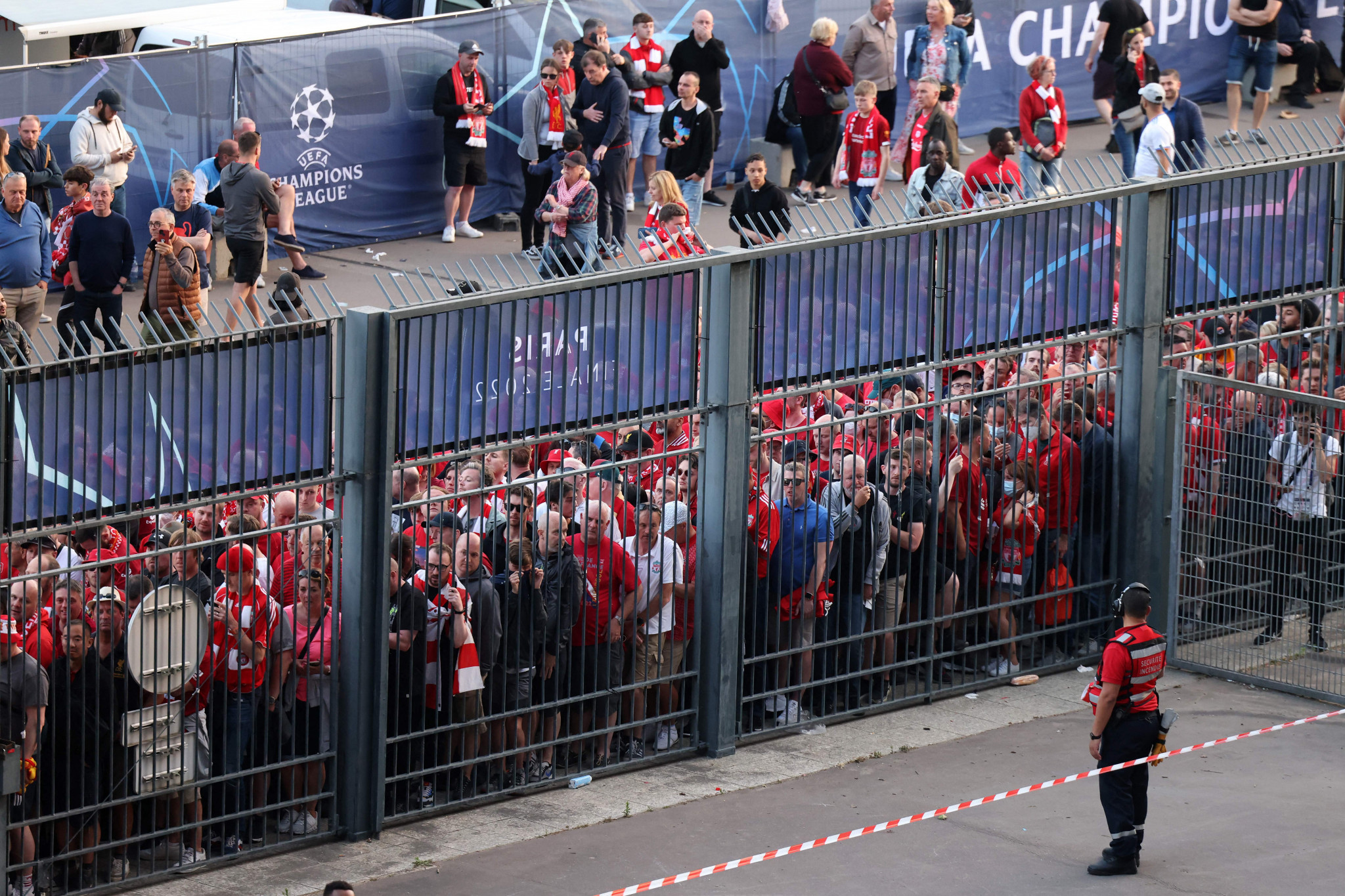 A French Senate report has acknowledged that the chaotic scenes which marred the UEFA Champions League final at the Stade de France "seriously questioned France's ability to organise major sporting events", including the Paris 2024 Olympics and Paralympics.

It describes the events at European club football's biggest match between Liverpool and Real Madrid on May 28 as a "warning shot", but says that France should still be trusted to organise major sporting events including the 2023 Rugby World Cup and 2024 Olympics and Paralympics provided the Government and other relevant bodies "draw the necessary lessons."

In their report, Senators François-Noël Buffet and Laurent Lafon ask the French Government to submit a report to Parliament by the end of the year on security organisation for major upcoming events in 2023 and 2024.

The French authorities and police were heavily criticised after the Champions League final for their handling of the match, including the indiscriminate use of pepper spray on supporters as they queued up to enter the Stade de France, which is set to host athletics and rugby sevens matches at Paris 2024.

Kick-off was delayed by more than 30 minutes following a poor organisation of the entry of fans into the stadium, which sparked horrifying images and videos of bottlenecks and crushes.

There were also widespread reports of fans being victims of crime outside the ground, including robberies and assaults, and it was later revealed that CCTV footage from the Stade de France had been deleted as no request had been made to save it.

UEFA had initially blamed the "late arrival" of Liverpool fans for the delay to kick-off and the French authorities suggested that up to 40,000 fake tickets had caused the shambolic scenes, but these claims were widely dismissed.

Sports Minister Amélie Oudéa-Castéra and Interior Minister Gérald Darmanin in particular came under fire for their comments in the aftermath of the match.

Both have since apologised for the scenes on the night.

The Senate report said that attempts to blame Liverpool supporters marked an attempt to shift blame.

"It is unfair to have wanted to make supporters of the Liverpool team bear the responsibility for the disturbances that occurred, as the Minister of the Interior did to divert attention from the inability of the state to adequately manage the crowds present and to curb the action of several hundred violent and coordinated offenders," it read.

"It therefore seems essential to complete the analysis of the dysfunctions occurred on the evening of May 28, 2022.

"The events at the Stade de France are a 'warning shot' which should not call into question France's ability to organise major sporting events, provided however that the actors concerned, including the Government, draw the necessary lessons.

"The importance of international sporting events expected in France in 2023 and 2024 can turn a serious collective failure into an opportunity to succeed upcoming deadlines."

The report detailed major shortcomings in the preparations for the events, and concluded that the "failure was above all the result of a chain of events and malfunctions that have led to a weakening of the systems put in place as well as temporary loss of control of the situation" before and after the match.

It said that the delivery of the match "suggests that the spectator experience has not been taken into account by the event organisers."

The areas of intelligence, transport and communication came in for particular criticism, and the report found that "crisis scenarios were insufficiently worked on and did not demonstrate the necessary flexibility in the face of the proliferation of unanticipated events".

Fifteen recommendations are provided by the report.

This includes a call for the Ministry of the Interior to create guidelines for the usage of tear gas which prevents "the exposure of people who do not present an immediate danger", and for the state and the French Football Federation to "change the way public authorities look on the supporters."

It also urges a clearer distinction between the functions of the Interministerial Representative for Major Sporting Events and Interministerial Delegate of the Olympic and Paralympic Games, and asks for the Government report on security organisation for major sports events in 2023 and 2024 before the end of the year.

Former Portuguese Education Minister Tiago Brandão Rodrigues is chairing its review into the Champions League final, with full findings expected to be published in November.

The match was initially due to be held at the Krestovsky Stadium in Saint Petersburg, but was moved to the Stade de France following the Russian invasion of Ukraine.

Real Madrid won the final 1-0 through a second half goal from Vinícius Júnior.

Nine venues across France are set to be used for next year's Rugby World Cup, scheduled for September 8 to October 28, with semi-finals and medal matches to be held at the Stade de France in Saint-Denis, a northern suburb of Paris.

Paris is the main host city for the Olympics and Paralympics in 2024, which marks 100 years since the French capital last held the Olympic Games.

Paris 2024 President Tony Estanguet has stressed that "we must learn all the lessons" from the Champions League fiasco, and said that 20,000 private security agents would be part of the Games.