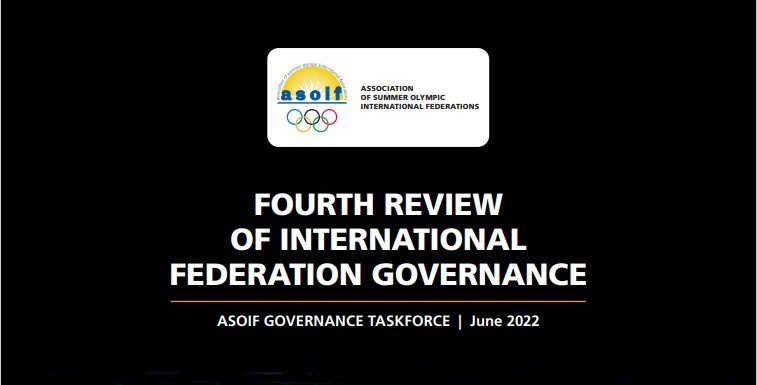 The Association of Summer Olympic International Federations (ASOIF) admits ensuring gender equality within high-ranking positions at sporting organisations remains a "challenge" and will "take time" after releasing the results of its latest governance review.

The study, conducted by the ASOIF’s Governance Task Force (GTF), claimed there was "some progress towards gender balance" at Executive Board level at International Federations (IF) but it "continues to be slow".

Only three of the 33 IFs that replied to the updated self-assessment questionnaire had at least 40 per cent female representation on their Boards - an increase from one when compared to the 2020 review.

It was also revealed that five IF Boards featured fewer than 15 per cent of women members - a drop from eight last time - with 15 comprising of at least 25 per cent of female officials with rules and policies to encourage gender balance.

The remaining 10 IFs had men filling 75 to 85 per cent of positions on their Boards, according to the review.

"Gender balance does remain a challenge and we are continuing our efforts," said James Carr, deputy executive director of ASOIF.

"I think the situation is a little bit healthier than it was two years ago.

"ASOIF is trying to do as much as it can and Petra Sörling was a participant on our inaugural women leading sport edition in the spring of 2021 and that’s been a very successful programme empowering women who are looking to stand at national, continental or international level.

"We repeated that this year and we intend to repeat that programme in future years.

"There are positive signs but it is clear it will take time."

ASOIF President Francesco Ricci Bitti, chair of the GTF, claimed the umbrella body for summer Olympic IFs was "very active in many forms to encourage women".

"Most often ladies are not ready to stand because they do not know the mechanism of promoting candidatures when talking about administration," said Bitti.

"Administration is a very specific activity and we have less women engaged but with satisfaction I can say that we have had the election of a new President in Petra Sörling.

"This is a great achievement in my opinion as President is even more difficult than member of the Board.

"My position is to not to press too much to avoid that we have women because they are women.

"We want women that are involved in sport and are active."

The fourth edition of the governance review follows previous studies by ASOIF in 2017, 2018 and 2020 with the aim of "fostering a culture of good governance" and helping to ensure IFs are "fit for purpose".

The IFs were asked to score themselves on 50 measurable governance indicators divided equally among transparency, integrity, democracy, development and control mechanisms.

AOSIF reports that almost all IFs improved their performance since the last assessment, with the highest scores among the five sections achieved in the area of transparency and the lowest in the control mechanisms section.

Each of the criteria was scored out of four, meaning a score of 200 was the highest possible for IFs to achieve.

The embattled International Boxing Association (IBA) was the only ASIOF member not to take part in the review after being suspended by the International Olympic Committee.

Bitti said ASOIF was in "good cooperation" with the IBA and insisted the IF had a "very qualified consultant in action" in Canadian lawyer Richard McLaren to focus on key governance reforms.

The World DanceSport Federation was the only associate member that failed to hit the 120 target but Bitti said the result was "very good" compared to previous IFs that had entered the review for the first time.

ASOIF reported that nine of 31 IFs that took part in the previous study had increased their score by at least 20 points.

There were improvements in financial transparency with 32 IFs publishing audited accounts, although it was noted by ASOIF that several were a year out of date.

It was also reported that there was an increase from 15 to 20 in the number of IFs which showed evidence of implementation of safeguarding programmes, despite some activities being curtailed by the cancellation of events.

ASOIF said the study shows a correlation between higher scores in the assessment and IFs with greater resources in terms of staff and financial revenue.

The body added that the questionnaires were submitted before Russia launched a full-scale invasion of Ukraine on February 24.

"Considering the huge disruption to international sport resulting from the pandemic, it is reassuring to see the positive progress IFs continued to make with their governance in the last two years," said Bitti.

"Now, with the ongoing war in Ukraine, IFs need to continue navigating amid considerable uncertainty and complexity, and a high level of public scrutiny.

"Only well-governed organisations are likely to be able to meet the challenge.

"I hope that this assessment assists and inspires IFs in that regard."