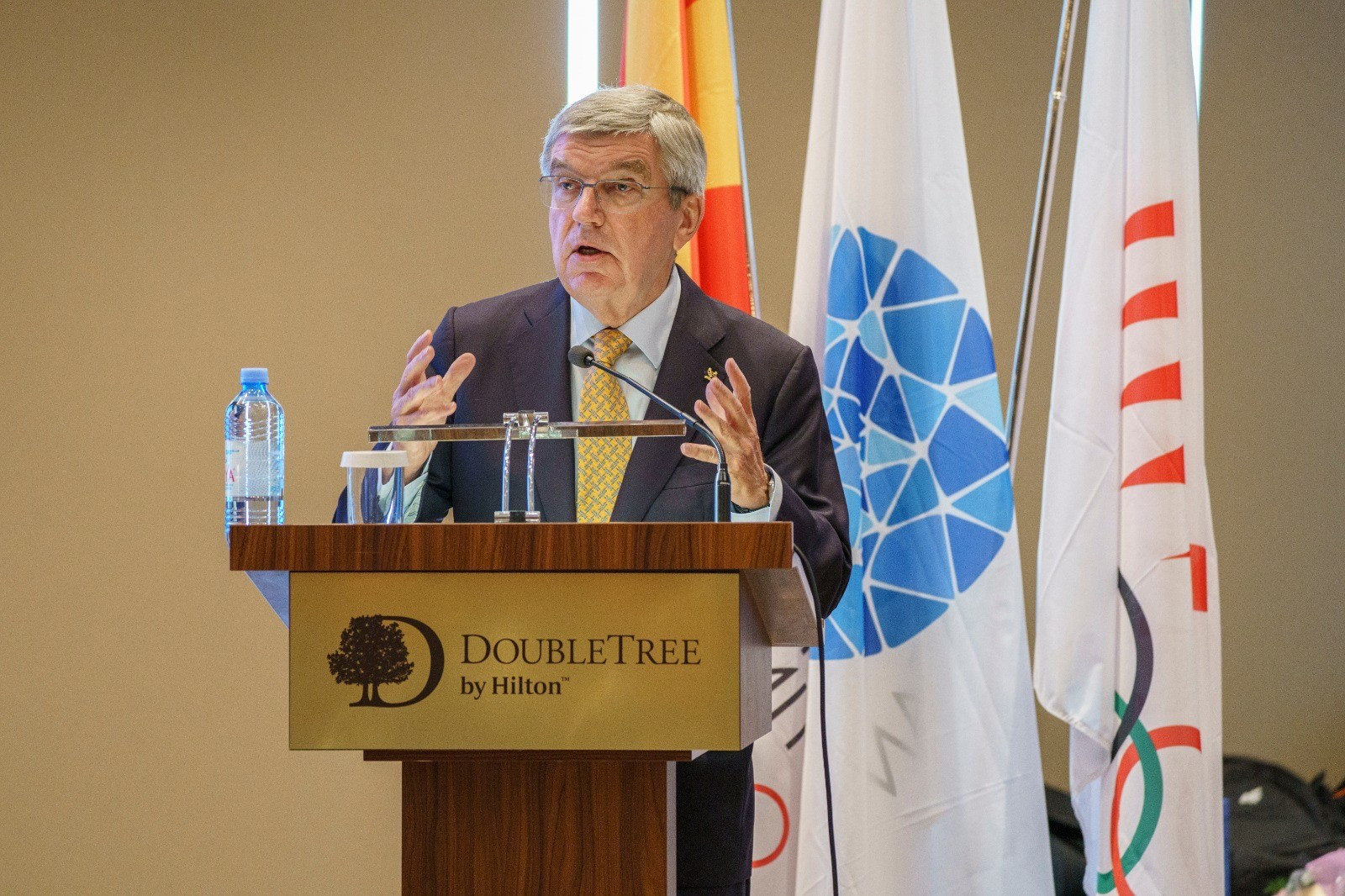 International Olympic Committee (IOC) President Thomas Bach has insisted at the European Olympic Committees (EOC) General Assembly here that sports organisations "cannot sanction someone just because of the passport that they hold".

In response to the invasion of Ukraine on February 24, the IOC urged International Federations to prevent athletes and officials from Russia and Belarus from taking part in their competitions.

The IOC has cited the breach of the Olympic Truce for its measures taken in response, and argued that it has only sanctioned the Russian and Belarusian Governments.

Recommendation on the non-participation of Russian and Belarusian athletes have been deemed "protective measures", and Bach cautioned against punishing individuals based on their nationality at today's General Assembly, arguing that it would set an "extremely dangerous precedent".

"It is fundamentally important that we follow the rules of law, and only sanction those who are responsible for something," the German official said.

"We cannot sanction someone just because of the passport that they hold.

"Because if we did so, we would drive these people into the camp of a propaganda machine that wants to make their people believe that all our measures and sanctions are part of a wider conspiracy against the Russian and Belarusian people."

In a lengthy speech in the North Macedonian capital, Bach recognised the strength of feeling with regards to the war in Ukraine, but claimed that the Olympic Movement should focus on promoting peaceful competition.

"We all have deep emotions and feelings about this war, and everyday we will be confronted by the atrocities of this war, and this is stirring up the emotions again," he said.

"This is true for all of us, but it is particularly true of course for those who are suffering the most, the Ukrainian people and our friends in the Ukrainian Olympic community.

"This is also true and hard for all our friends who are living close to Ukraine.

"We have friends and family who are everyday feeling the suffering of the refugees from Ukraine, who have listened to their stories, to their experience, to their suffering, and there, I say thank you to so many of you who have played a great role in our humanitarian mission to assist those of our community who are suffering.

"And for those athletes from Ukraine, refugees, providing them with what they need also to continue to practise sport and to represent the National Olympic Committee of Ukraine in international competitions."

"This mission is to unite the world in peaceful competition.

"And this mission is even more important in our so fragmented world,

"We have to always have in mind this mission.

"Even, and especially if their countries are in confrontation, or at war, because a competition between just like-minded Governments or countries are not a great symbol of peace.

"Peace is something that we have to prove."

Bach continued by arguing that the sports organisations should avoid becoming tangled with politics.

"Our mission is not a political mission," he said.

"And to achieve this non-discrimination, we have to be politically neutral, because if we take a political stance, then we are drawn into all these confrontations and wars.

"We cannot become a tool for politicians to achieve their political goals, otherwise we lose our unifying power, and even contribute to the deepening of such divisions in our world that is already breaking apart in so many ways.

"As a global movement, we can only function if we are rules-based, and only if everybody accepts these rules can international sport function.

"This makes sport unique, it's maybe the only areas of our lives where we have worldwide accepted rules and standards."

The IOC President admitted that its recommendations would have to remain in place, but urged event organisers to do their utmost to ensure competitions are open to all.

"Unfortunately for us, the time to lift these protective measures has not arrived," Bach said.

"Our decisions are based on these solid principles that reflect our values, and not political differences.

"As organisers of major sports event, which also you, the EOC, are, we have to ensure that host countries are respective of their responsibilities to provide free access to all qualified athletes and participants."

Bach then cited examples of "how hard we [the IOC] have been fighting for our principles", including to ensure the participation of athletes from Israel, Kosovo, Armenia and Azerbaijan at various events.

Last month after the final day of the 139th IOC Session in Lausanne, Bach admitted the IOC's relationship with the Russian Government has "dramatically deteriorated over the past years", and that "the far-reaching political, social and economic consequences of the war make it a turning point in world history".

However, his comments in Skopje follow similar remarks made at the Association of Summer Olympic International Federations General Assembly in Lausanne earlier this week, where he criticised a ban on Russian and Belarusian tennis players from Wimbledon.

They also come after the EOC Executive Board decided that the ROC and NOC of the Republic of Belarus should not attend the General Assembly in Skopje.

ROC President Stanislav Pozdnyakov said yesterday that he believes preventing the ROC from attending the EOC General Assembly was "completely contrary to the rhetoric of the International Olympic Committee" and "a violation of the integrity of the Olympic Movement", as reported by Russia's official state news agency TASS.

EOC President Spyros Capralos, who is also an IOC member, said the decision had been taken due to "the current exceptional context, and the need to protect the proper functioning of this General Assembly", although insisted "this is an exceptional, one-off protective measure".

Russian and Belarusian athletes and officials had been banned from this year's Summer and Winter editions of the European Youth Olympic Festival by the EOC in line with the IOC's recommendations.

The EOC's General Assembly is due to conclude tomorrow.