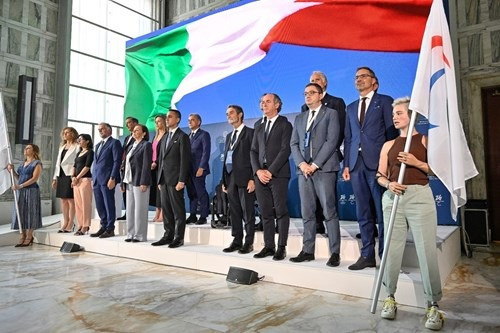 Milan Cortina 2026 President Giovanni Malagò claims the Winter Olympics in four years’ time will showcase Italy’s "image of efficiency and excellence" and will be a chance to "further revitalisation for the economy".

Malagò was speaking during an event, called "Milan Cortina 2026 Winter Olympics and Paralympics. The Diplomacy of Sport in the Face of Global Challenge" at the Ministry of Foreign Affairs headquarters in Rome.

The Mayors of Milan and Cortina d'Ampezzo were also among those present as well as Malagò, Milan Cortina 2026 chief executive Vincenzo Novari and Italian Paralympic Committee President Luca Pancalli.

The event was concluded with a symbolic passage of the Olympic and Paralympic flags by Milan Cortina 2026 ambassadors Deborah Compagnoni and Bebe Vio.

Di Maio spoke of the importance of sport in helping to boost tourism and promoting peace during his speech.

"The universal language of sport is a powerful vehicle for dialogue and social inclusion, a diplomacy tool for peace among peoples that contributes to the achievement of the sustainable development goals of the United Nations 2030 Agenda," said Di Maio.

"Sport is also an extraordinary tool for promoting tourism and the three hundred and sixty degrees of Made in Italy excellence, on which the Farnesina has long been committed to the creation of innovative integrated promotion projects and formats."

Malagò, who is also head of the Italian National Olympic Committee, claimed sport was a "fundamental asset to our country".

"[Sport is a] vehicle of the highest values such as equality, inclusion and respect," said Malagò.

"And, at the same time, ambassador of the uniqueness of Italy and of its desire to continue to be a protagonist on the international scene.

"The Olympics and Paralympics in Milan Cortina 2026, and all its magnificent territories, will be an opportunity for further revitalization for the economy and an open window to the world: a business card that will allow us to consolidate our image of efficiency and excellence."