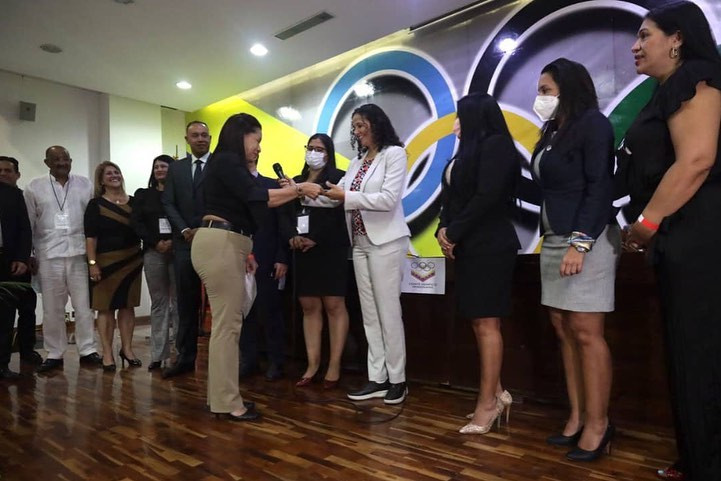 Former softball player María Soto has been elected as the Venezuelan Olympic Committee (VOC) President, following a warning from the International Olympic Committee (IOC) that "free and fair" elections were required to avoid a suspension.

Eduardo Álvarez had been seeking to be re-elected to a position he held since 2006.

A group of 13 National Federations were widely reported to have questioned Álvarez’s Presidential nomination and taken issue with the election process.

Pedro Infante, the vice-president of the Venezuelan Football Federation and a former Sports Minister, had accused Álvarez of creating a "trap" to ensure he was re-elected.

Venezuelan prosecutors announced earlier this month that Álvarez is being investigated over alleged "irregularities" in the organisation of 2007 Copa América, and regarding athletes' build-up to the Beijing 2008 Olympic Games.

Álvarez was not present at the VOC General Assembly, where Soto was elected as his successor.

Soto, who becomes the first woman to lead the organisation, was part of a single group of candidates for VOC positions.

The candidates were reportedly negotiated with the involvement of the Venezuelan Government, which is led by Nicolás Maduro.

The VOC said 47 of the 53 delegates present at the meeting voted in favour of the new VOC leadership, with six abstentions.

"We are here to move forward together," said Soto, who represented Venezuela in softball and carried the nation's flag at the Beijing 2008 Olympic Games.

"We thank Eduardo Álvarez and his entire outgoing Board for the legacy they have left in sport.

"We will keep innovating and bringing new ideas to support athletes."

Franklin Cardillo was named as the organisation’s treasurer, while Zobeira Hernández and José Barreto will take on roles as directors.

Soto also thanked Panam Sports and the International Olympic Committee for their support.

Jimena Saldaña, Panam Sports second vice-president, was an observer of the elections.

Venezuela’s vice-president Delcy Rodríguez was present at the General Assembly, with the official vowing Government support.

"I bring you a hug from President Maduro," Rodríguez said.

"They also have the Legislative Power for the development of sport in Venezuela.

"President Maduro is waiting for you very soon at the Palace of Miraflores to lend a hand and to always count on the national government.

"Professor Alvarez is leaving with his head high, his clean name, to continue accompanying this COV in reaping fruits and victories for Venezuela."

The IOC and Panam Sports had sent a letter to the VOC earlier this month, which called for free and fair elections.

The IOC told insidethegames the VOC had been "facing undue political pressures" before the delayed elections.

The organisation and Panam Sports called for all eligible National Federations and candidates to be permitted to participate.

The IOC had warned the VOC could be suspended if the vote does not meet its requirements.

Venezuela enjoyed its most successful Olympic Games earlier this year, winning one gold and three silver medals at Tokyo 2020.

The nation’s success also provoked controversy, with all four medallists reportedly being obliged to thank President Maduro after their success.

The video messages were allegedly recorded under supervision from Venezuelan officials, before being shown back in the nation.