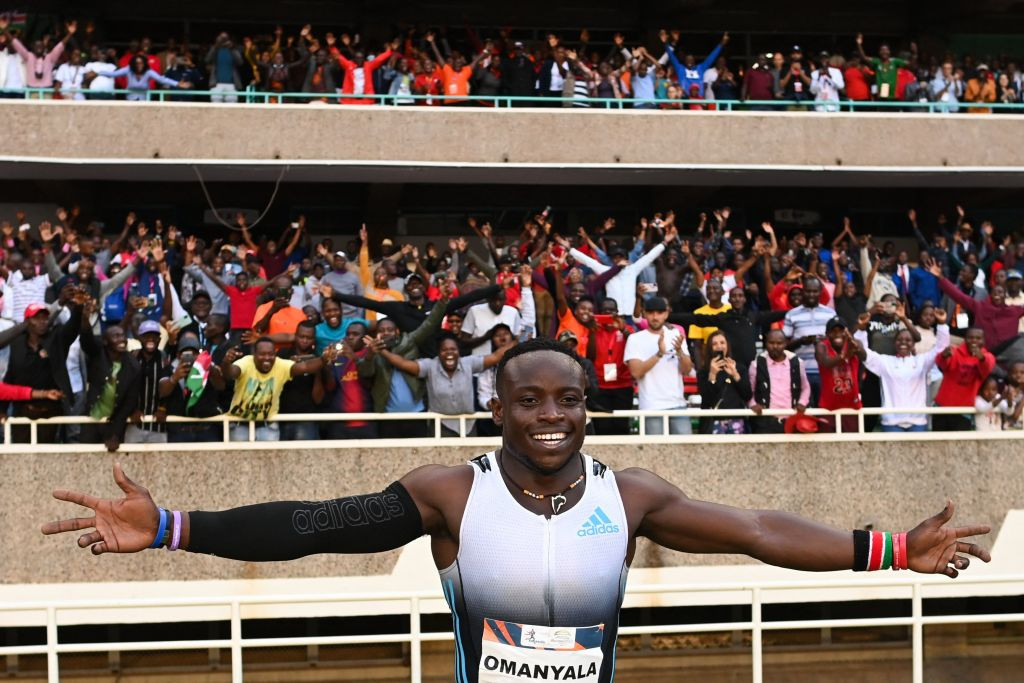 Home sprinter Ferdinand Omanyala won the concluding 100 metres at the Kip Keino Classic in Nairobi in 9.85sec - the fastest time of the season so far - to ignite scenes of joy in a crowd which included the Kenyan President, Uhuru Kenyatta.

While the late withdrawal of Italy’s Olympic champion Marcell Jacobs, who reportedly suffered a stomach complaint overnight, diminished this showpiece event in the thin air of Kenya's capital, there was no shortage of competition as the 26-year-old Omanyala, after making a terrific start, powered home ahead of the United States' Olympic silver medallist Fred Kerley, who clocked 9.92.

Omanyala - who was given a 14-month doping suspension in 2017 - thus maintained his high level of performance in this meeting, having clocked 9.77 in finishing second last year behind Trayvon Bromell of the US, who ran 9.76 - the two fastest times of 2021.

The main part of the fourth of this season’s World Athletics Continental Tour Gold meetings was book-ended by outstanding 100m performances following the superb clocking of 10.67, again fastest this year, achieved by Jamaica’s 35-year-old double Olympic champion Shelly-Ann Fraser-Pryce, whose sea-level 10.60 last year put her third on the all-time list.

"The atmosphere was fantastic," Fraser-Pryce told the trackside interviewer.

"When I heard my name and the reaction of the fans in the stadium I just wanted to execute a very good race.

"I’m very excited and I hope to come back again."

The Ministry of Sport had waived admission fees for the meeting, which had to take place without spectators last year, and the gesture proved well-starred as spectators were treated to a string of world-class performances.

Earlier in the afternoon the Moi International Sports Centre in Kasarani had reverberated in appreciation of another home win as 17-year-old Emmanuel Wanyonyi, who won the world under-20 800m title in this same - albeit empty - stadium last year in a championship record of 1min 43.76sec, came home in 1:45.01 ahead of a field including Kenya’s Olympic silver medallist Ferguson Rotich.

Another fine home effort came from Abel Kipsang who won the 1500m by more than four seconds in 3:31.01 - the second-fastest time set at altitude after compatriot Ronald Kwemoi's 3:30.89 from 2017.

There was also keen local interest in the men’s and women’s 3,000m steeplechase events, where Kenyan athletes were seeking to regain their traditional boasting rights after the victories at the Tokyo Olympics of Morocco’s Soufiane El Bakkali and Uganda’s Peruth Chemutai.

Chemutai eventually finished third behind long-time leader Norah Jeruto, who recently changed her Kenyan citizenship to represent Kazakhstan and who clocked a winning time of 9:04.95, the fastest clocked this year.

In the absence of El Bakkali, the men’s race was a Kenya-dominated affair won by Commonwealth Games silver medallist Abraham Kibiwot in 8:12.92, with former Olympic and world champion Conseslus Kipruto, making a comeback after injuries and personal problems, fifth in 8:32.76.

One person for whom the meeting will not form a happy memory, however, was Namibia’s Olympic 200m silver medallist Christine Mboma, who had to be stretchered from the track after pulling up two-thirds of the way through the women’s 100m as she strove to get back on terms with Fraser-Pryce.

In her absence the women's 200m race was won by Nigeria’s Aminatou Seyni in a national record of 22.43.

If you watch one thing today, watch this.@realshellyannfp runs 10.67 at the #ContinentalTourGold

In the women’s hammer, Poland’s triple Olympic champion Anita Włodarczyk opened her season with a winning effort of 78.06 metres, the second-best distance recorded this year.

Meanwhile Christian Coleman of the US is preparing to run his first 100 metres race since winning the world title over the distance in 2019 at tomorrow’s Golden Grand Prix in Tokyo.

Coleman, who missed the Tokyo 2020 Olympics while serving an anti-doping suspension following whereabouts failures, will be joined in the Japanese capital by numerous compatriots.

Two of them, Rai Benjamin and Michael Norman, will be returning to the Olympic Stadium where they won medals at Tokyo 2020 nine months ago and will be competing for the first time this year in their specialist distances.

Both were part of the victorious United States 4x400m relay team in Tokyo, with Benjamin adding a silver in one of the greatest Olympic races ever seen as he ran the 400m hurdles in 46.17sec, breaking the world record that had existed before the race, only to finish second as Norway's Karsten Warholm improved his own mark to 45.94.

In the fifth of this season’s World Athletics Continental Tour Gold meetings, Benjamin will face a field that includes Japanese champion Kazuki Kurokawa, who won at this meeting last year in a personal best of 48.68.

Norman, who competes in what will be his first 400m in nine months, has already opened his season in impressive fashion having been third in the 200m at the second Continental Tour Gold meeting of the season at Walnut in California in 19.83, one place ahead of Benjamin, who finished in 20.01.

Also in the field will be the world indoor bronze medallist and US indoor champion Gabbi Cunningham, who was seventh in the Olympic final.

World javelin champion Kelsey-Lee Barber of Australia returns to the runway where she earned Olympic silver.

Ryuji Miura was one of Japan’s breakthrough performers last year when, still an under-20 athlete, he won the 3,000m steeplechase in this Continental Tour Gold event in a national record of 8:17.46 before going on to clock 8:09.92, earning a place in the Olympic final, where he finished seventh.