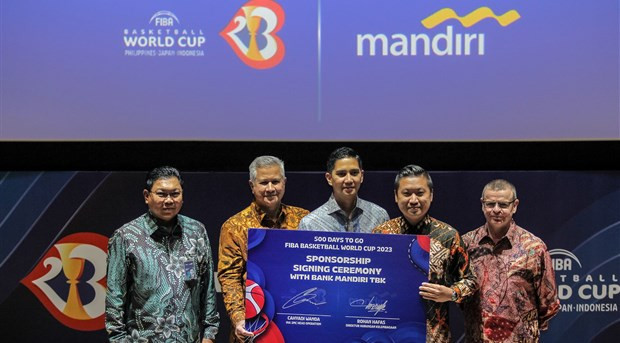 Bank Mandiri has been announced as a local sponsor of the 2023 Basketball World Cup for one of the tournament’s co-hosts Indonesia.

The partnership was announced to mark 500 days until the event, due to take place across the Philippines, Japan and Indonesia between August 25 and September 10 2023.

Speaking about the agreement Junaidi said: "Currently, Bank Mandiri has identified itself as a company that supports the progress and development of basketball in Indonesia and many sports activities.

"Therefore, when Indonesia became co-host of basketball's biggest international event, it provided an important opportunity for Bank Mandiri to become better known on the world stage."

Crocker added: "We are happy to have Bank Mandiri join the team as the first top tier sponsor of the FIBA Basketball World Cup 2023 in Indonesia.

"This strategic decision from Bank Mandiri to help develop basketball in the country is an important one, not only in Asia but also across the globe."

As part of the agreement Bank Mandiri will receive key commercial rights access to the tournament within Indonesia.

Next year’s tournament is set to be the first edition of the FIBA Basketball World Cup to be hosted across multiple countries, with 32 countries expected to compete for the trophy, currently held by Spain.