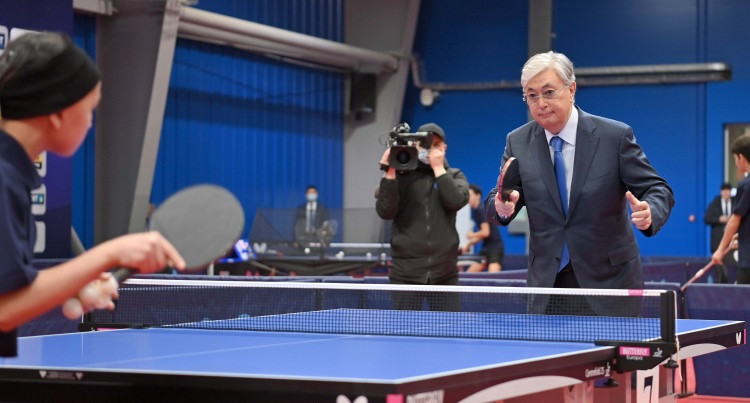 Kazakhstan President Kassym-Jomart Tokayev has toured Almaty’s new Table Tennis Centre which is set to be the training base for the country’s Olympic hopefuls and venue for international competition.

During his visit, Tokayev looked around the multi-million-pound complex and played table tennis with a promising young player.

It features a playing hall with 12 tables and a capacity of up to 24 as well as a training room with six tables.

A hotel is also situated on site boasting 39 rooms that can accommodate up to 79 people, a restaurant and food court along with a gym, medical office, coaching and locker rooms and sports equipment store.

The National Olympic Committee of the Republic of Kazakhstan (HOK) said the complex, which can hold 328 spectators, meets all the criteria set out by the International Table Tennis Federation (ITTF).

The ITTF Kazakhstan Open is due to be staged at the new centre which is also expected to hold national competitions and training camps.

"It is symbolic that the head of state opened the Table Tennis Centre on the days of the Nauryz holiday celebration," said Abulgazin.

"This centre will be a training base for the national, youth, and junior teams' athletes and used for coaches' advanced training.

"Our federation has always focused on strengthening the infrastructure and the popularisation of the sport as they lead to achievements in the international arena."

According to the HOK, more than 20 table tennis centres and 15 playing halls have been opened throughout Kazakhstan over the past few years.

The Karaganda Table Tennis Centre was opened in 2020 before the Jenimpaz Centre in Pavlodar followed a year later.

Work has also started on the Table Tennis and Rhythmic Gymnastics Centre in Taraz, while there are plans for other facilities in Ust-Kamenogorsk, Shymkent, and Aktobe.

"By the example of the Karaganda Centre, we witness how popular table tennis is among amateur teams," added Abulgazin.

"The same table tennis centres will open in other cities around the country.

"We will keep providing sports equipment necessary for the sport's development to district centres and rural areas as well.

"Table tennis has great traditions in our country, and the National Federation will pursue its work to enhance them in cooperation with regional offices."