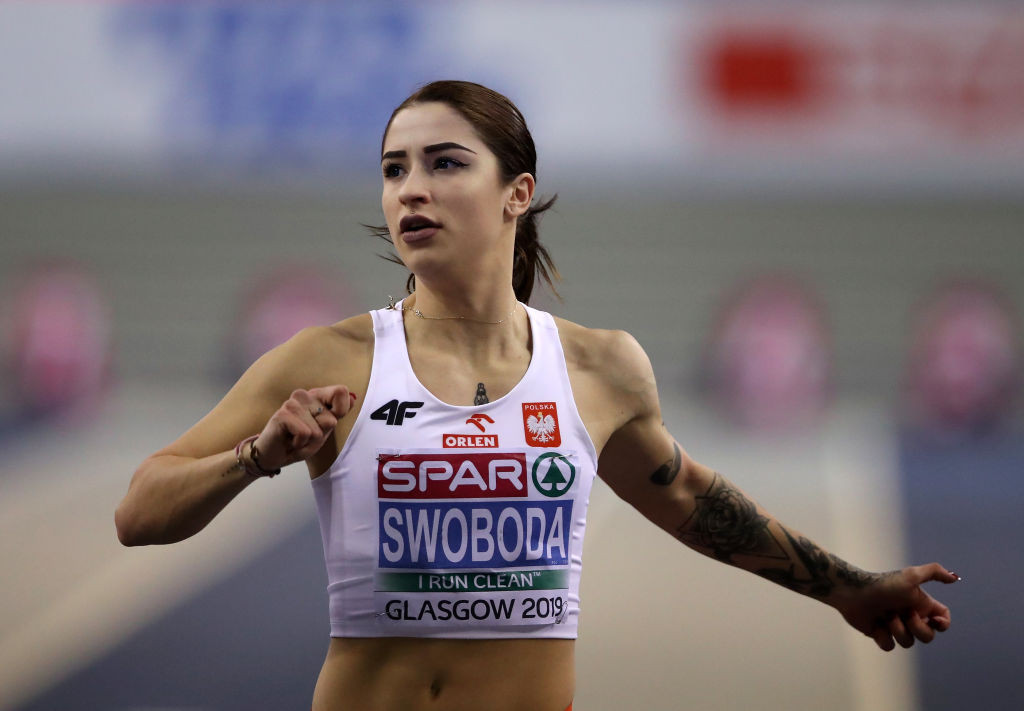 The look of shock on the face of home sprinter Ewa Swoboda said everything about the magnitude of her achievement in Toruń tonight as she beat Jamaica’s Olympic 100 and 200 metres champion Elaine Thompson-Herah over 60m in the concluding event of the Copernicus Cup.

The 24-year-old Pole, who has European indoor gold and silver medals over 60m, got away to her usual electric start, and while the World Female Athlete of the Year in the lane to her left closed towards the end it was Swoboda who crossed first in 7.03sec - just 0.03 off the season's best and national record she ran earlier this month.

After leaping up into the stand to kiss her excited parents, an athlete for whom injury ruined most of 2021 continued to put one hand over her mouth as she took in a victory which speaks highly for her prospects at the World Athletics Indoor Championships in Belgrade from March 18 to 20.

Thompson-Herah, who is yet to win a world title indoors or out, had said beforehand that her performance would help her decide whether to contest the World Athletics Indoor Championships and that she was hoping for a sub-seven-second performance.

Ethiopia's Gudaf Tsegay produced the other outstanding performance of the sixth of seven World Athletics Indoor Tour Gold meetings this season as she won the women’s 1500m in 3min 54.77sec, the second-fastest time ever run behind the world record of 3:53.09 she set herself in Liévin last year.

It was a huge individual effort, partly driven by her frustration at falling during the first lap in tilting at the women's mile world record at last Thursday's (February 17) meeting in Liévin, where she nevertheless got up to win.

Elliot Giles, running on the track where he set the second-fastest 800m of all time last year of 1:43.63, earned victory again as he equalled his season’s best of 1:45.42 to finish clear of Sweden’s Andreas Kramer, who clocked 1:45.71.

Finishing fifth in an indoor 800m was unremarkable for Poland's 32-year-old former world indoor champion and three-time European champion Adam Kszczot, but this was a unique performance in that it was his farewell on home ground, given that he has announced he will retire at the end of this indoor season.

Gudaf Tsegay 🇪🇹 runs 3:54.77 to lead an Ethiopian 1-2-3-4-5 in the 1500m, less than two seconds off her own world indoor record!#WorldIndoorTour @CopernicusCup pic.twitter.com/XIDgDrKgjJ

There was a special presentation to Kszczot at the end as he lined up alongside the two home winners on the night - Swoboda and Damian Czykier, winner of the men’s 60m hurdles in a national record of 7.48sec.

Olympic 400m hurdles bronze medallist Femke Bol of The Netherlands exercised herself once again to good effect over the 400m flat, winning in 50.64, the fastest time recorded this year and just 0.01 outside her personal best.

Catriona Bisset of Australia earned a memorable win in the women’s 800m, clocking 2:00.16 to finish narrowly ahead of Uganda's world champion Halimah Nakaayi, who finished in 2:00.19.

The women’s long jump went to Sweden’s Khaddi Sagnia, who equalled her season’s best of 6.70 metres three days after winning at the last Indoor Tour Gold meeting in Birmingham.

Ernest Obiena of the Philippines equaled his season’s best of 5.81 metres to win the men’s pole vault.

The men’s 60 metres was won by Elijah Hall-Thompson of the United States in 6.53sec.

Filip Mihaljevic won the men’s shot put with the best effort achieved so far this season, equalling his Croatian indoor record of 21.84 metres and beating home thrower Konrad Bukowiecki by one centimetre.