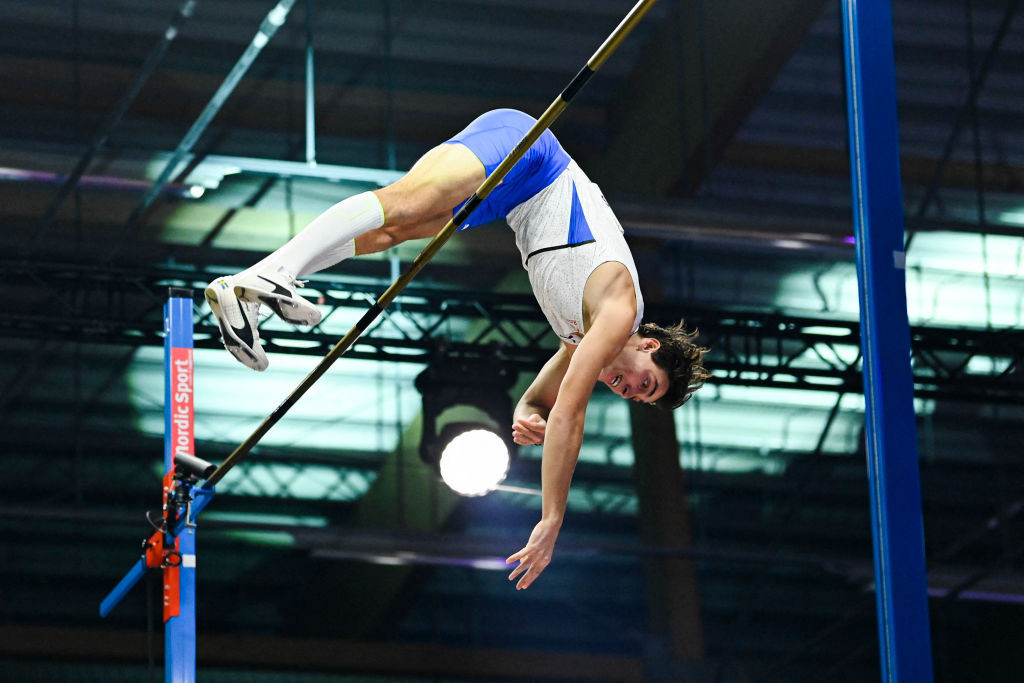 The 22-year-old Swede looked as if he had bettered the mark of 6.18 metres he set at the at the Müller Indoor Grand Prix when it was held in Glasgow two years ago, only to brush the bar off with his chest on the way down.

One punch into the track showed his frustration after a competition he had won on countback at 5.81m from his dogged predecessor as Olympic champion, Thiago Braz of Brazil.

Hodgkinson began a season in which she hopes to contest world indoor and outdoor titles by winning at the fifth of this season's seven World Athletics Indoor Tour Gold meetings in a 2022 world-leading mark of 1min 57.20sec - the fastest indoor time for 20 years, putting her sixth on the all-time list.

It was a perfectly-paced effort from the athlete who will only turn 20 next month as she finished well clear of Catriona Bisset, who clocked an Australian record of 1:59.46, and Jamaica's Natoya Goule, a winner in Liévin on Thursday night (February 17), who recorded 1:59.85.

Hodgkinson thus bettered the British mark of 1:57.91 set in 2020 by Scottish athlete Jemma Reekie, who had earlier made a brave but unsuccessful effort to win a 1,000 metres race won by fellow Briton and local runner Isabelle Boffey in a personal best of 2:38.25.

"I wrote down my goals at the beginning of this year, and one of them was the British indoor record," Hodgkinson said.

"Now I just want to build on my performance this year."

Olympic 100m and 200m champion Elaine Thompson-Herah opened a season in which she will seek a first individual world title with an assured victory over 60m in 7.08sec in her first indoor race since 2019.

World 200m champion Noah Lyles won the men's 60m on a photo finish from his fellow American Ronnie Baker as both men clocked 6.55 - a personal best for Lyles.

It was still a bright result for Baker, who had only qualified as fastest loser after clocking 6.67 in his heat, having clocked 6.62 in an aborted opening run after failing to hear the recall gun.

Home runner Nethaneel Mitchell-Blake, who anchored Britain home to a Tokyo 2020 4x100m silver that has just been invalidated by confirmation of a positive doping test for team-mate CJ Ujah, was due a pick-me-up.

Sadly the gloom continued for him as a time of 6.74 in the re-run heat proved insufficient for him to progress.

She's called @FastElaine for a reason 🔥

World indoor 60m hurdles record holder Grant Holloway extended his unbeaten record in this discipline since 2014 to 52 races as he floated clear of a world-class field to win in 7.41.

The world champion and Olympic silver medallist, who had won in Liévin on Thursday evening in a 2022 world-leading mark of 7.35, was sufficiently clear to complete his race with a hop over the line ahead of local runner and world indoor champion Andrew Pozzi, second in 7.59.

The Briton, who also ran in Liévin, had reached Birmingham amid Storm Eunice-related travel disruption by sharing a taxi from London with Jarret Eaton of the United States, who was third in 7.60.

Earlier another of Birmingham’s own, Elliot Giles - whose annexation last year of Sebastian Coe’s British indoor 800m record with 1min 43.63sec put him second on the all-time list - received an expectedly warm ovation when being introduced to the crowd.

But Giles was just unable to deliver a home win as Kenya’s Collins Kipruto overtook him two strides from the line to win in personal best of 1:45.39, with the Briton second in 1:45.42.

Authorised Neutral Athlete Mariya Lasitskene, one of three Olympic champions on show, finished a dejected joint second in the women’s high jump - in company with a delighted local jumper Laura Zialor, for whom 1.91 metres was a personal best - as Australia’s Eleanor Patterson won with 1.97m.

The men's 400 metres was won in 45.72sec by Kahmari Montgomery of the United States, with 19-year-old Briton Edward Faulds diving over the line to earn third place in a European junior record - and World Indoor Championships qualifying time - of 46.16, beating the mark of 46.39 that has stood to East Germany’s Thomas Schönlebe since 1984.

Ethiopia's 2016 world indoor 1500m champion Dawit Seyaum, perhaps startled by the challenge of Ireland’s Sarah Healy, sprinted clear over the final 300 metres to win in 4:04.35, with Healy being rewarded with second place in a personal best of 4:06.94.

Jamaica’s Stephenie Ann McPherson, who overhauled early leader Lieke Klaver over the final 30m of the 400m, was rewarded with victory in a personal best of 51.93sec, with the Dutch athlete second in 51.49.

Hopes that Peter Elliott’s 1990 British indoor 1500m record of 3:34.20 would come under threat from a field including European and Commonwealth bronze medallist Jake Wightman and Neil Gourley failed to materialise as victory went to Kenya’s fast-finishing Abel Kipsang in a personal best of 3:34.57.