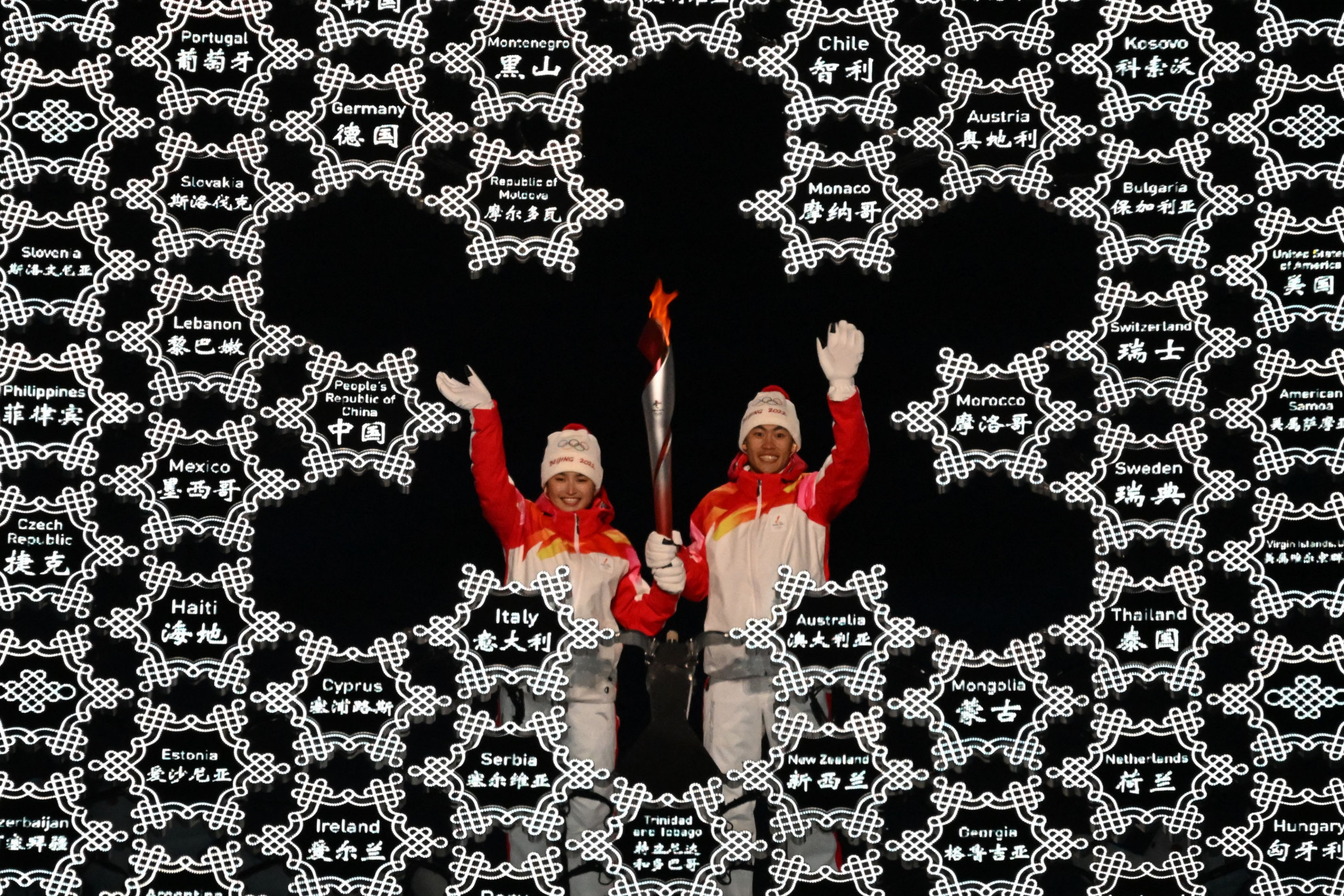 Cross-country skier Dinigeer Yilamujiang, a Uyghur from the Xinjiang region, was chosen as one of the athletes to light the Olympic Cauldron, designed in the shape of a snowflake as the Winter Olympic Games here were officially opened.

Dinigeer joined Nordic combined athlete Zhao Jiawen to do the honours at the National Stadium to mark the start of the Games, staged amid criticism of China’s human rights record.

It was a controversial selection as the Chinese Government has been condemned for its treatment of Uyghur Muslims and other ethnic minorities.

China denies the allegations but several nations, led by the United States and including Australia and Britain, decided not to send Government officials to the Games as part of the diplomatic boycott.

The decision to choose Dinigeer will be seen as sending a political message to those Governments who decided to shun the Games.

International Olympic Committee President Thomas Bach called on world leaders to "give peace a chance" in his speech.

"In this Olympic spirit of peace, I appeal to all political authorities across the globe - observe your commitment to this Olympic Truce," he said.

Prior to the Opening Ceremony, Zumretay Arkin from the World Uyghur Congress claimed Beijing 2022 was a "propaganda event."

The Chinese Government has repeatedly hit out at the allegations, claiming camps are training centres for stamping out Islamist extremism and separatism.

During his speech at the Opening Ceremony, Bach also insisted athletes will be able to "live peacefully together under one roof" at the Athletes' Villages where he said there would be "no discrimination for any reason whatsoever."

"In our fragile world, where division, conflict and mistrust are on the rise, we show the world - yes, it is possible to be fierce rivals, while at the same time living peacefully and respectfully together," said Bach.

"This is the mission of the Olympic Games, bringing us together in peaceful competition.

Seven Chinese athletes from six different decades from the 1950s to the 2000s were chosen as the final Olympic Torch Relay runners at the Bird's Nest.

Dinigeer qualified for Beijing 2022 having become the first Chinese cross-country skiing medallist in an International Ski Federation-level event, finishing second in the opening women's leg of a three-leg sprint series in Beijing in March 2019.

Zhao will become the first Chinese athlete to compete in Nordic combined in a Winter Olympic Games.

Dinigeer is among five athletes from the Xinjiang region competing at Beijing 2022, with Tian Ruining, Bayani Jialin, Alemasi Kahanbai and Hanahati Muhamaiti the others.

Chinese President Xi Jinping appeared on the big screen at the end of the pre-show as all the cast members and spectators gave him a rapturous applause.

The Opening Ceremony got off to an explosive start with a firework display in the shape of numbers counting down to the beginning of the showpiece event.

Beijing 2022 claim representatives from 56 ethnic groups from all parts of China passed on the national flag which was raised by members of the People's Liberation Army.

An ice cube was formed in the centre of the arena after icy blue Chinese ink fell from the sky and turned into the Yellow River.

As the cube melted away, the Olympic Rings in ice were revealed in stunning fashion before they were lifted to allow athletes to pass under them during the Parade of Nations.

A total of 91 National Olympic Committees took part in the march, including Saudi Arabia and Haiti, who are both making their Winter Olympic debuts.

Taiwanese athletes were also among those to participate after the Chinese Taipei Olympic Committee were told by the IOC that it must attend having previously stated that they would not due to travel issues.

The snowflake theme ran through the entire Ceremony with Beijing 2022 claiming it represented "solidarity" and "prosperity".

The Olympic Anthem was performed by 40 youngsters from the Malanhua's cr Children's Choir in the Hebei province.

After the Olympic Oath was read out by athletes, officials and coaches, hundreds of children ran onto the stage holding illuminated dove drops.

A large snowflake then emerged as the Cauldron was lit by Dinigeer and Zhao.

Outside the Beijing National Stadium, Zhang Junying - a volunteer for Beijing 2022 - was taken on a basket crane to light another snowflake.