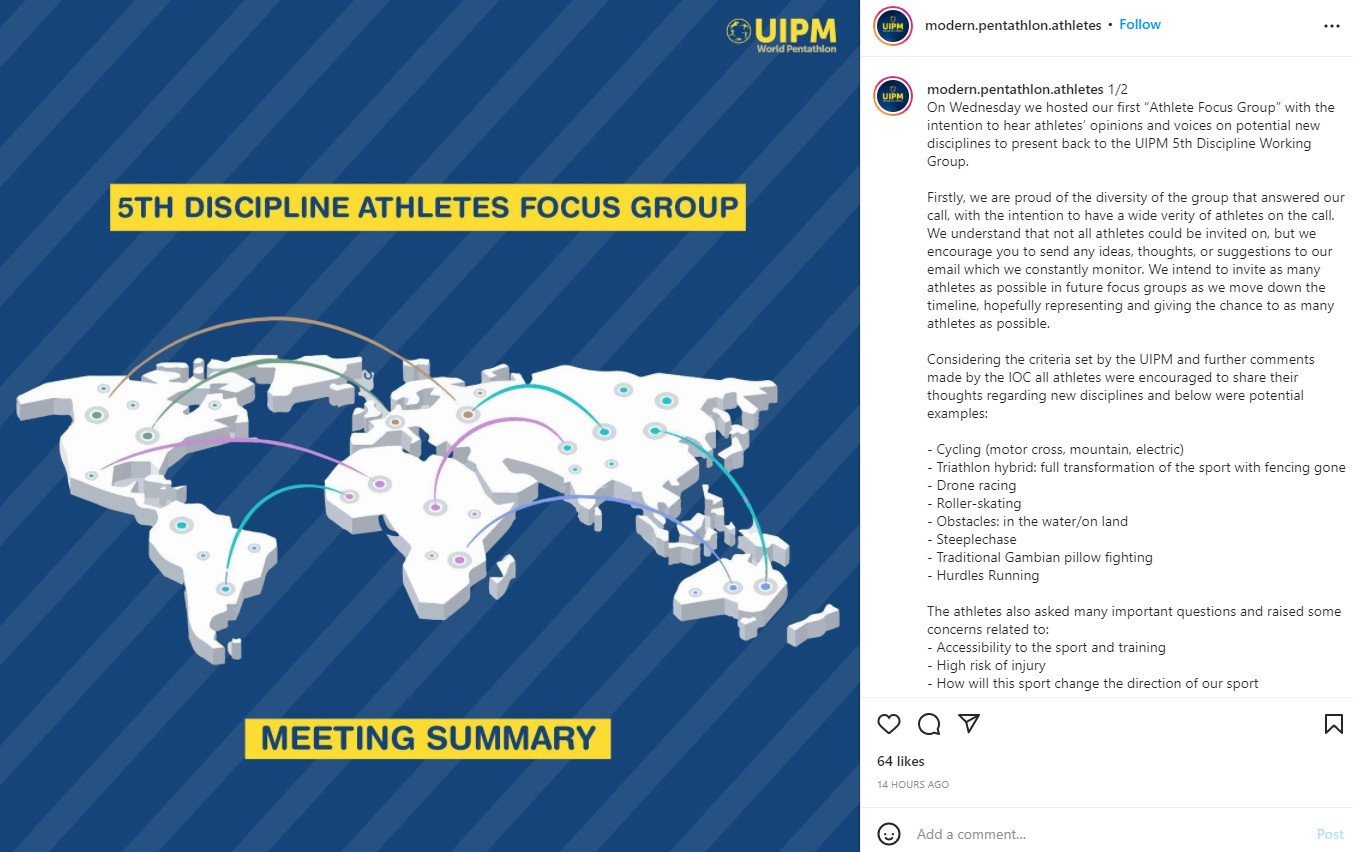 Pillow fighting and drone racing are among the sports to have been raised as possible alternatives to riding as the fifth discipline in modern pentathlon at the Olympic Games after Paris 2024.

According to a post from the International Modern Pentathlon Union (UIPM) Athletes Committee on Instagram, eight disciplines have been suggested as the replacement for riding, axed from the sport's Olympic slate following the horse-punching scandal at Tokyo 2020 last year.

Another proposal would also see fencing dropped from the programme in favour of a "triathlon hybrid".

The Instagram post includes several responses from commenters including athletes, some of whom asked if it was "a joke".

The inclusion of pillow fighting, a combat sport where competitors hit each other with "specialised" pillows, will be sure to raise eyebrows among modern pentathletes and further afield in the Olympic Movement.

Professional pillow fighting is due to make its pay-per-view debut with an event organised by Pillow Fight Championship (PFC) in Florida in the United States today.

"It is not something where you sit there and laugh and feathers are flying," PFC chief executive Steve Williams told Reuters.

"It is serious - it is hardcore swinging with specialised pillows."

Just when you think you've seen it all…

The Pillow Fight Championship will make its live, pay-per-view debut this weekend.pic.twitter.com/EQHrS5Llxx

Drone racing, which has grown in popularity since emerging in Germany in 2011, involves participants with head-mounted displays showing a live feed aiming to complete a course while controlling small radio-controlled aircraft or quadcopters equipped with cameras.

The proposals were derived from feedback the UIPM Athletes Committee received as part of its latest focus group meeting on the new fifth discipline.

A separate working group has been tasked with recommending the replacement for riding, which will be crucial in determining the sport's Olympic future.

Modern pentathlon was left off the initial sports programme for Los Angeles 2028 by the International Olympic Committee (IOC) in December in response to the controversial decision to axe riding.

IOC President Thomas Bach warned the UIPM must "finalise its proposal for the replacement of horse riding and for the overall competition format" before the sport can be included.

He said the UIPM's proposal has to "demonstrate a significant reduction in cost and complexity, and improvement across the areas of safety, accessibility, universality, appeal for youth and general public".

The UIPM has been given until next year to come up with a suitable alternative to riding.

Modern Pentathlon Federation of Russia President Vyacheslav Aminov claimed this week the new discipline would be tested at World Cups this year, starting with the season-opener in Cairo in March.