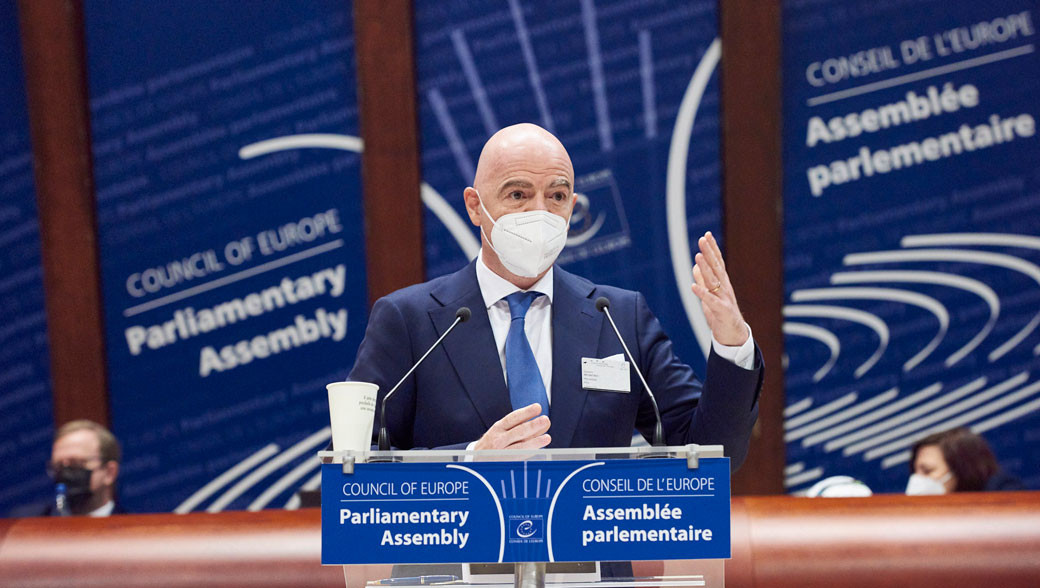 FIFA President Gianni Infantino has claimed widely-criticised comments suggesting the biennial World Cup proposal help prevent African migrants from crossing the Mediterranean and help prevent "death in the sea" have been "misinterpreted and taken out of context".

Infantino has proposed staging the men's and Women's World Cup every two years rather than every four years, although this has prompted strong opposition from UEFA, the South American Football Confederation (CONMEBOL) and the International Olympic Committee.

The Swiss official discussed the idea during his visit to the Parliamentary Assembly of the Council of Europe in Strasbourg.

"We need to find ways to include the whole world to give hope to Africans so that they don’t need to cross the Mediterranean in order to find maybe a better life but, more probably, death in the sea," Infantino said his audience in the Palais de l’Europe.

"We need to give opportunities, and we need to give dignity, not by giving charity but by allowing the rest of the world as well to participate.

"Maybe the World Cup every two years is not the answer.

Tony Burnett, the chief executive of Kick It Out - the organisation based in London which aims to tackle discrimination in football - was among those who condemned Infantino's remarks.

"They already have the funds to invest in creating and inspiring opportunity for disadvantaged people around the world.

"It is therefore completely unacceptable to suggest that a biennial World Cup, predominantly set up to drive further profits for FIFA, could be a solution for migrants who risk their lives, sometimes fleeing war-torn countries, to seek a better life."

My colleagues at Human Rights Watch interview refugees around the world pretty much every day.

We write reports about the reasons - the abuses, the hardships - that forced them to leave their homes.

They never mention the timing of World Cup tournaments. https://t.co/HpsHvBLX40

"We write reports about the reasons - the abuses, the hardships - that forced them to leave their homes.

"They never mention the timing of World Cup tournaments."

Infantino later issued a statement through FIFA's media department on Twitter, which read: "Given that certain remarks made by me before the Council of Europe earlier today appear to have been misinterpreted and taken out of context, I wish to clarify that, in my speech, my more general message was that everyone in a decision-making position has a responsibility to help improve the situation of people around the world.

"If there are more opportunities available, including in Africa, but certainly not limited to that continent, this should allow people to take these opportunities in their own countries.

"This was a general comment, which was not directly related to the possibility of playing a FIFA World Cup every two years."

Infantino claimed at a global summit last month that the biennial World Cup would deliver an additional $4.4 billion (£3.3 billion/€3.9 billion) in the first four-year cycle.

UEFA and CONMEBOL have threatened to boycott the tournament if plans are pushed through.

During his address in in Strasbourg, FIFA President addressed concerns about this year's FIFA World Cup in Qatar, which has been overshadowed by human rights concerns in the host country, with Amnesty International and Human Rights Watch among the groups who have raised concerns over the treatment of migrant workers and LGBT+ (lesbian, gay, bisexual, and transgender) rights.

Football’s main stakeholders must put human rights values at the heart of the sport, the Parliamentary Assembly of the Council of Europe - PACE - claimed in wide-ranging resolution on football governance.

"Business must not take precedence over values," said the Parliamentarians, underlining that human rights should always be the main driving force for football’s governing bodies.

Among other things, the Assembly warned countries must meet basic human rights requirements before being able to host major events such as the World Cup, and any country where women faced "clear discrimination in their access to sport" should simply be disqualified.

FIFA claimed, that while more could be done, hosting the World Cup had helped to instigate labour law reforms in Qatar, alongside work from other international institutions and trade unions.

"We also need to recognise that change indeed has happened and we must support those who are investing their time, their energy and their belief for this change to happen," he insisted.

Infantino was elected as FIFA President in February 2016, succeeding the disgraced Swiss official Sepp Blatter, and was re-elected for a second term in 2019.

Both FIFA World Cups are already set to expand following moves introduced during his Presidency - the men's tournament from 32 to 48 teams from 2026, and the women's from 24 to 32 in 2023.