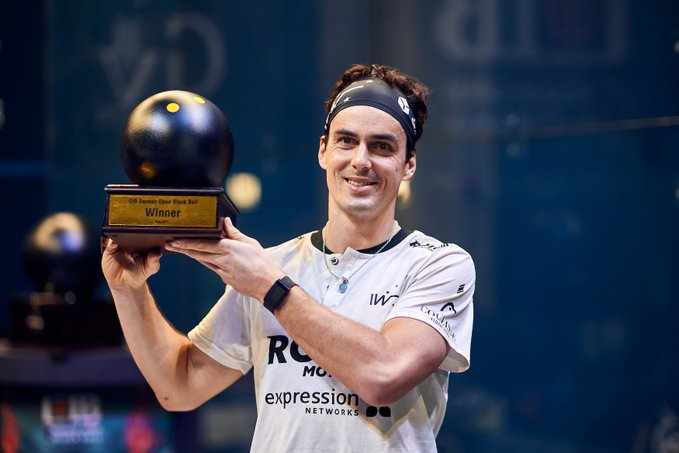 The men’s singles final was a repeat of the Canary Wharf Classic, where Coll came from a game down to beat his Egyptian rival.

World number one Farag headed into their rematch after a hard-fought five-game win over compatriot Mostafa Asal in yesterday’s semi-finals, while Coll had beaten Egypt’s Marwan ElShorbagy in three games.

Coll produced a fast start in the final by claiming the opening game 11-7 at the Black Ball Sporting Club, with the tournament second seed then claiming the second 11-5.

Farag produced a strong challenge in the third game but was unable to prevent Coll from securing an 11-7, 11-5, 13-11 victory at the Professional Squash Association (PSA) World Tour Gold event.

"It was a real test for me tonight," said Coll.

"I had my game plan sorted and I just wanted to execute that from the word go.

"Ali had a brutal match last night, and I knew if I could make it tough from the word go then I could have a good push.

"To beat a player like Ali you’ve got to be faultless the whole match, and I’m really proud of that performance from start to finish, I’m really happy."

"One of my goals was to win in Egypt because they’ve got so many good players here," Coll added.

"They’ve raised the level of squash, so to come here and win a tournament was something that I had set my mind on and really wanted to do.

"It’s a really hard place to come and beat two Egyptians in their home territory."

Coll becomes the first non-Egyptian male to win a PSA World Tour title event in the nation for four years.

France’s Gregory Gaultier was the previous overseas winner, having triumphed at the El Gouna International in 2017.

Farag has now finished as the runner-up at the Black Ball Squash Open on three occasions.