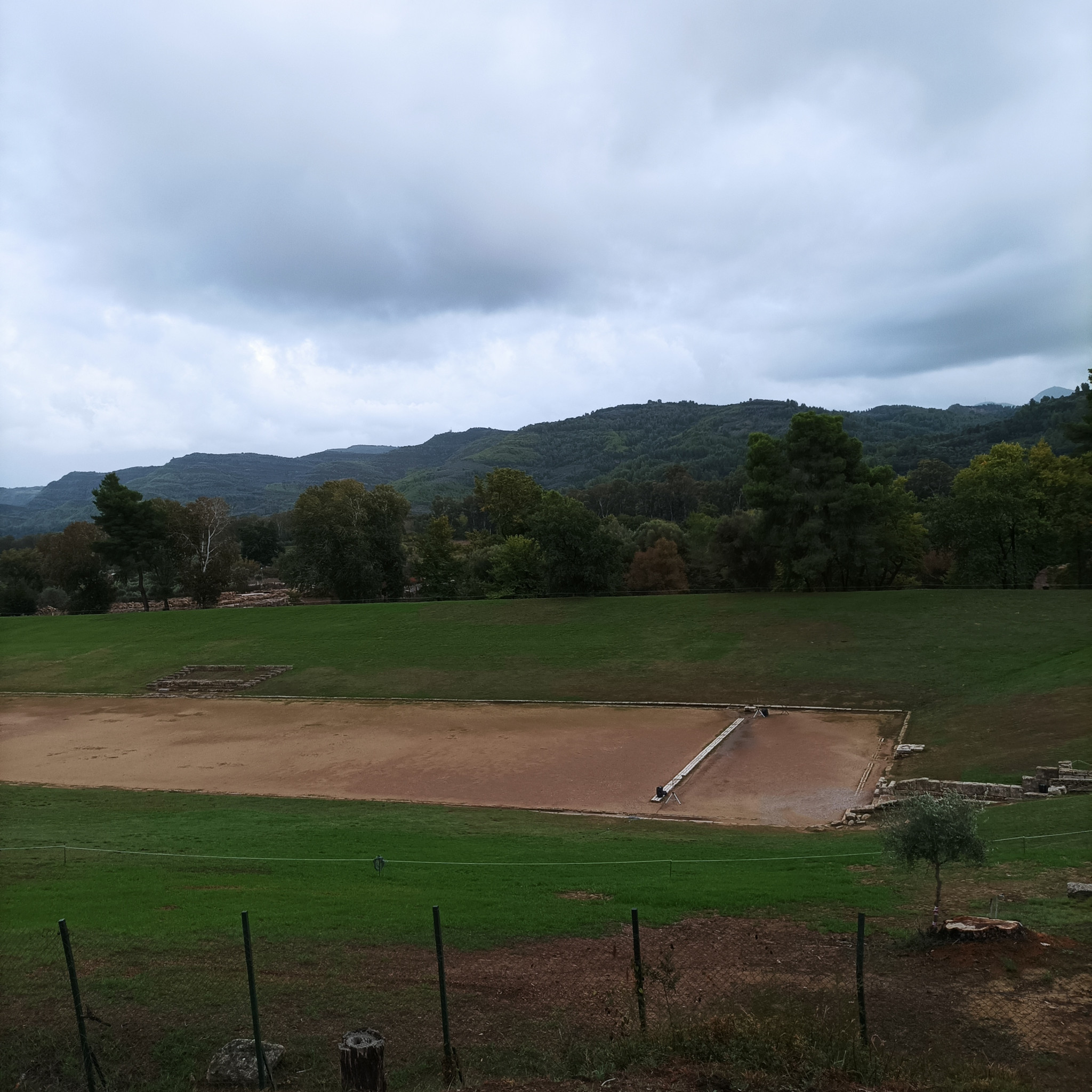 With only three days to go until the Olympic Flame Lighting Ceremony for Beijing 2022, performers were forced to rehearse inside by a prolonged downpour which briefly flooded the grounds of the Ancient Stadium in Olympia.

Rehearsals had been continuing all week for a ceremony which is scheduled to take place amongst the ruins of the Temple of Hera.

Today’s cloud has also cast uncertainty over whether it will prove possible for High Priestess Xanthi Georgiou to light the Flame from the sun’s rays on the day of the Ceremony.

If not one held in reserve from rehearsals would be used.

This proved the case at the start of the last Winter Olympic Torch Relay for Pyeongchang 2018, which was also held in October.

Local forecasts suggest that the weather will improve over the weekend in time for the Ceremony, set for Monday (October 18).

The approach to the Village of Olympia is festooned with the flags of the Olympic nations and closer to the Town Hall, the Chinese flag hangs alongside the Greek flag in recognition of the Ceremony.

Hellenic Olympic Committee President Spyros Capralos has insisted the Beijing 2022 Flame "will send a message of hope for the final victory of humanity over the pandemic that has plagued us for the last two years."

Writing in the official souvenir programme, Capralos said: "It will travel to Beijing for the 2022 Winter Olympics, as a messenger of the Olympic Values of Excellence, Friendship and Respect without discrimination."

The ceremony is to be attended by Greek President Katerina Sakellaropoulou who will join International Olympic Committee President Thomas Bach for the Lighting.

Unusually, organisers have decided that because of precautions against COVID-19, the Flame will not tour Greece but will be taken straight to Athens.

The first runner, Ioannis Antoniou, an Alpine skier, will carry the Flame to the monument honouring Baron Pierre de Coubertin, the French nobleman who revived the Games.

There will also be a short symbolic Relay taking the Flame towards the village of Olympia.

"The organisation of the Lighting Ceremony in Ancient Olympia and the Handover of the Flame in the Beijing delegation will strengthen the close relationship and ties between Greece and China, two countries with great heritage to the world and a long history," Capralos said.

The Ceremony is set to be much shorter than is usual and instead of a children’s choir it has been revealed that renowned Greek soprano Vassiliki Karagianni will perform the anthems.