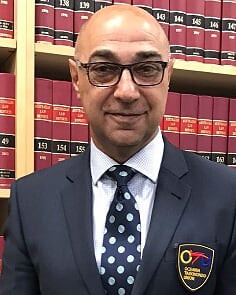 Incumbent John Kotsifas has been announced as the only candidate in World Taekwondo Oceania's (WTO) Presidential election.

The Australian first became President in 2015 and will not be challenged at the election on September 24, which will be held virtually.

He was elected again in 2017 and can now look forward to another term of four years.

As a continental President, Kotsifas also serves as a vice-president of World Taekwondo.

Australians will hold a number of key roles at WTO as incumbent Stuart Lee is also the only candidate for secretary general.

His compatriot Colby Au is the only person standing for treasurer.

There is a two-horse race for senior vice-president with Australia's Daniel Trenton taking on New Zealand's Jin Keun Oh.

Eleven applications have been received for three Council positions, including five from women.

Two of those successful must be female to ensure gender equality on the body.

Updates include term limits - although terms served before the new constitution came into force will not count.

Age limits, gender balances and a stipulation that at least two thirds of the Council is elected were also approved.

Candidates for election must be 70 or younger, although it is 80 for incumbents.