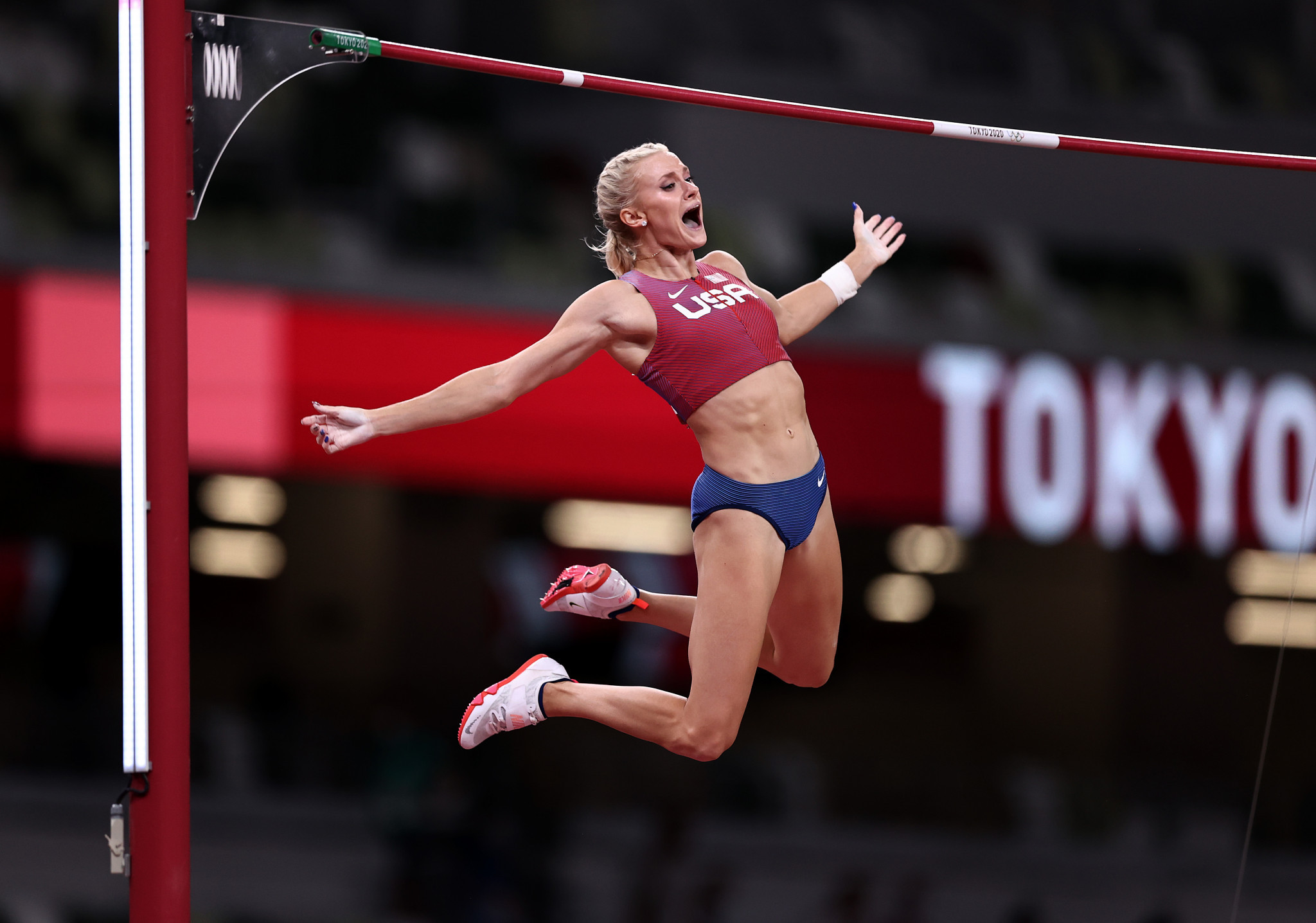 Katie Nageotte of the United States earned gold here as the women’s pole vault took a final twist away from the athlete who seemed destined to win it, world champion Anzhelika Sidorova of the Russian Olympic Committee (ROC) team.

Sidorova moved serenely up to 4.90 metres with successive first-time clearances as everyone else struggled to find form, but Nageotte, who leads this year’s world list with a personal best of 4.95m, kept herself in contention before becoming the only athlete to manage that height.

Meanwhile Holly Bradshaw, with a first-time clearance at 4.85m, became the first Briton, male or female, to win an Olympic pole vault medal.

It was a huge moment for this 29-year-old from Preston, whose high hopes of winning European indoor gold earlier this year ended in disappointment.

Sidorova's best clearance was also 4.85m, and no failures before then meant that the ROc competitor edged Bradshaw for the silver medal.

Greece's defending champion Katerina Stefanidi battled with customary determination, reaching the last four after twice clearing at her third and final attempts, but she could ultimately go no further than 4.80m on a night when fluctuating winds within the Olympic Stadium seemed to be making life hard for the majority of the field.

"It was the worst warm-up I have had in a long time and I did an ugly first few jumps," Nageotte said.

"It took me a few heights to get in to it, but I was just fighting and I finally found a smooth jump - it came together."

The evening came together for Belgium’s Nafi Thiam, who successfully defended her heptathlon title, and Canada’s Damian Warner, who won the decathlon in an Olympic record of 9,018 points.

Warner, who had dominated the competition from the opening 100 metres, where he had equalled his own decathlon world best time of 10.12sec, more than safely negotiated the 10th and final discipline of the 1500m, finishing fifth, to become only the fourth man in history to better 9,000 points.

At 31, and after winning bronze at Rio 2016, as well as two bronze and one silver world medals, Warner has his heart’s desire.

France’s Kevin Mayer, who set the world record of 9,126 points in 2018, earned an unlikely silver position given the painful back injury with which he has been suffering since arriving in Japan.

An inspired personal best of 73.09 metres in the penultimate contest of the javelin pushed Mayer up from fourth to second, and he consolidated that position as he pushed himself home in 14th place in the 1500 metres, finishing on 8,726, with bronze going to Australia’s 21-year-old Ashley Moloney on 8,649 - an Oceania record.

"It's crazy," said Warner, "ever since I was a kid, sitting on the couch and watching track and field and the Winter Olympics with my mom...

"When I was in grade 6 I wrote in a school project that I'd be in the Olympics one day, and who would have known that I would be an Olympic gold medallist.

"In Rio 2016, when I finished third, while I was happy to be on the podium I was also disappointed that I didn't get on top.

"So I used that experience from 2016 to accomplish the performance that I've had over the last two days."

Thiam of Belgium only needed a competent 800m, without the Dutch athlete whom she leapfrogged into gold during the penultimate javelin competition, Anouk Vetter, doing anything spectacular, to secure another Olympic gold.

The final event began to the sound of sirens wailing outside but there were no alarms as Thiam and Vetter finished seventh and ninth respectively in the second heat.

Thiam's Belgian colleague Noor Vidts pushed on to win the sprint, with Vetter's compatriot Emma Oosterwegel striving onwards in second place and doing enough to earn bronze in a personal best of 6,590 points.

Thiam won with 6,791 from Vetter, who recorded a national record of 6,689, with Vidts also setting a personal best of 6,571 in fourth place.

"It feels so good, I can't believe it, I am so emotional I can't describe it," Thiam said following victory.

"The first day was difficult for me so on day two I had to really focus.

"I knew I had to do something really good in the long jump and javelin.

"My coach was so positive and told me he believed in me today.

"I am really happy I was able to go through that and put my performances together."

Grenada's London 2012 men’s 400m champion Kirani James, back at the highest level after injuries and a struggle with the thyroid problem, Graves’ dsease, battled to the last centimetre in the finishing straight to earn bronze.

James came into the straight ahead, but the leggy figure of Steven Gardiner, the world champion from The Bahamas, moved inexorably past him to claim gold in a season's best of 43.85sec.

Silver went to Anthony Zambrano of Colombia in 44.08, but James, the blast from the past, secured another Olympic medal nine years after his London triumph as he clocked 44.19, with Michael Cherry of the US fourth in a personal best of 44.21.

"When the gun went off I stumbled a bit coming out, but I recovered, I kept it moving, and with 200m to go, I started to push a little bit," said Gardiner, who failed to make the Rio 2016 final.

"I came across the line and saw my name on the big screen and I was in first place - I'm just happy."

Earlier in the afternoon Massimo Stano had earned Italy’s third athletics gold medal of these Games in winning the men's 20 kilometres race walk, held in Sapporo.

Stano held off the challenge of two home walkers over the final couple of kilometres to win in 1 hour 25min 5sec in stifling conditions, with Koki Ikeda taking silver in 1:21:14, and Toshikazu Yamanishi bronze in 1:21:28.

After crossing the line Stano - whose colleagues Lamont Marcell Jacobs won the men’s 100 metres and Gianmarco Tamberi a share in the men’s high jump title - waited for the two Japanese walkers, greeting them both with a deep and courteous bow.