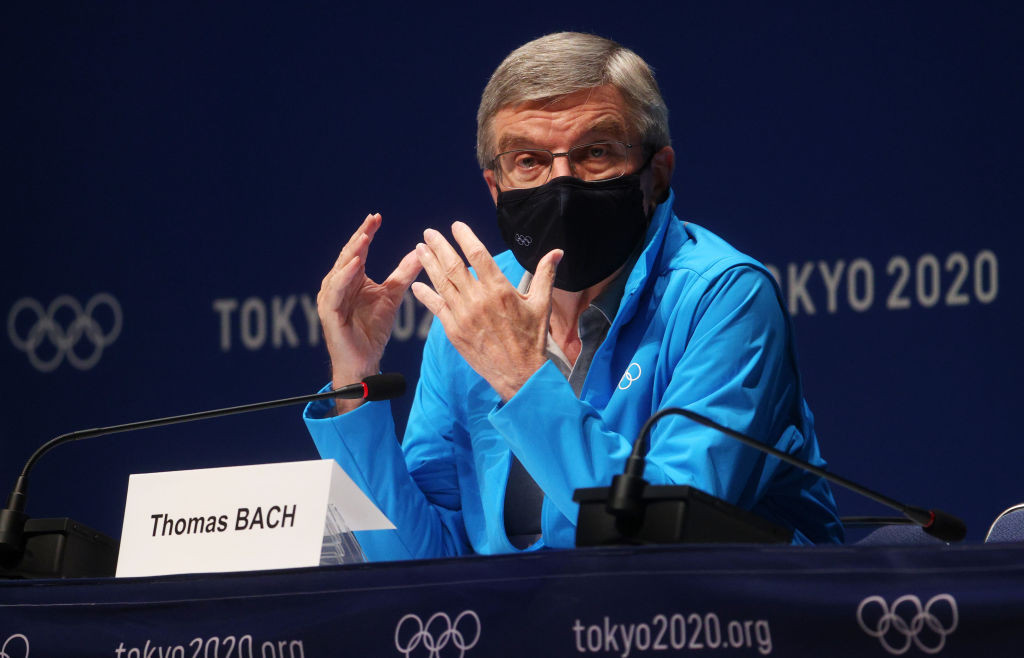 Bach said the IOC was "very happy" that Tsimanouskaya, who is in Warsaw after being granted a humanitarian visa by Poland, was safe and with her family after Belarusian coaches tried to send her home from Tokyo 2020 against her will.

Belarus athletics head coach Yuri Moisevich and team official Artur Shumak "were requested to leave the Olympic Village immediately and have done so" for their involvement in the case, the IOC said earlier today.

A Disciplinary Commission has been established by the IOC to investigate the National Olympic Committee of the Republic of Belarus (NOCRB) and its role in Tsimanouskaya being ordered to leave the Japanese capital after she criticised Belarusian coaches on social media.

The 24-year-old, who was forced to miss her 200 metres race on Monday (August 2), alleged Belarusian officials attempted to "forcibly take me out of the country without my consent".

Speaking at a press conference in Poland, Tsimanouskaya said the order to send her home had come from "high up".

The IOC claimed it took swift action in the case, which sparked global concern for Tsimanouskaya, but it took the organisation four days to remove the officials from the Village.

Moisevich and Shumak were still able to have contact with Belarusian athletes from Sunday (August 1) until they were stripped of their accreditation on Thursday (August 4).

The NOCRB has been hit with several sanctions by the IOC after failing to protect athletes who had protested against President Alexander Lukashenko, who led the organisation until being replaced by his son Viktor earlier this year.

Human rights and campaign groups said the Tsimanouskaya case amounted to "kidnap" and urged the IOC to suspend the NOCRB.

"The IOC is not in a position to change the political system in a country," Bach said.

"This is also not our mission and not our remit, this is true for this case and many other issues.

"What our responsibility and our remit is, is to protect the athletes as much and as far as we can.

"Then to sanction those, or to keep those, out of the Games who are infringing there on our values.

"With regard to other people who may be responsible, the procedure is ongoing and due process has to be followed.

"The Disciplinary Commission will come up with these conclusions.

"We have shown immediate action in this deplorable case but also we are happy that she is safe in Poland and as far as we heard also together with her immediate family.

"The Polish NOC is at her disposal to support her in her sports activities."

The NOCRB claimed in a statement the "coaching staff of the Belarusian national athletics team made a decision to withdraw Krystsina Tsimanouskaya from the Olympic Games, according to the doctor’s report on her mental and emotional state".

In an updated statement following the decision to strip Moisevich and Shumak of their accreditations, the NOCRB said they "reserve the right to appeal".

"In turn, we are still open to continue the dialogue and are in close cooperation with the IOC to clarify all the circumstances of the decision," the NOCRB said.

"The NOC of Belarus fully defends and will continue to protect the interests of all Belarusian athletes and coaches from any forms of discrimination, if any."

NOCRB President Lukashenko is banned from attending Tokyo 2020, as is his father and former NOCRB head, Alexander, who was controversially re-elected as President of Belarus last year in elections widely dismissed as neither free or fair.

Payments to the NOCRB, except those meant to support athletes, have also been frozen.