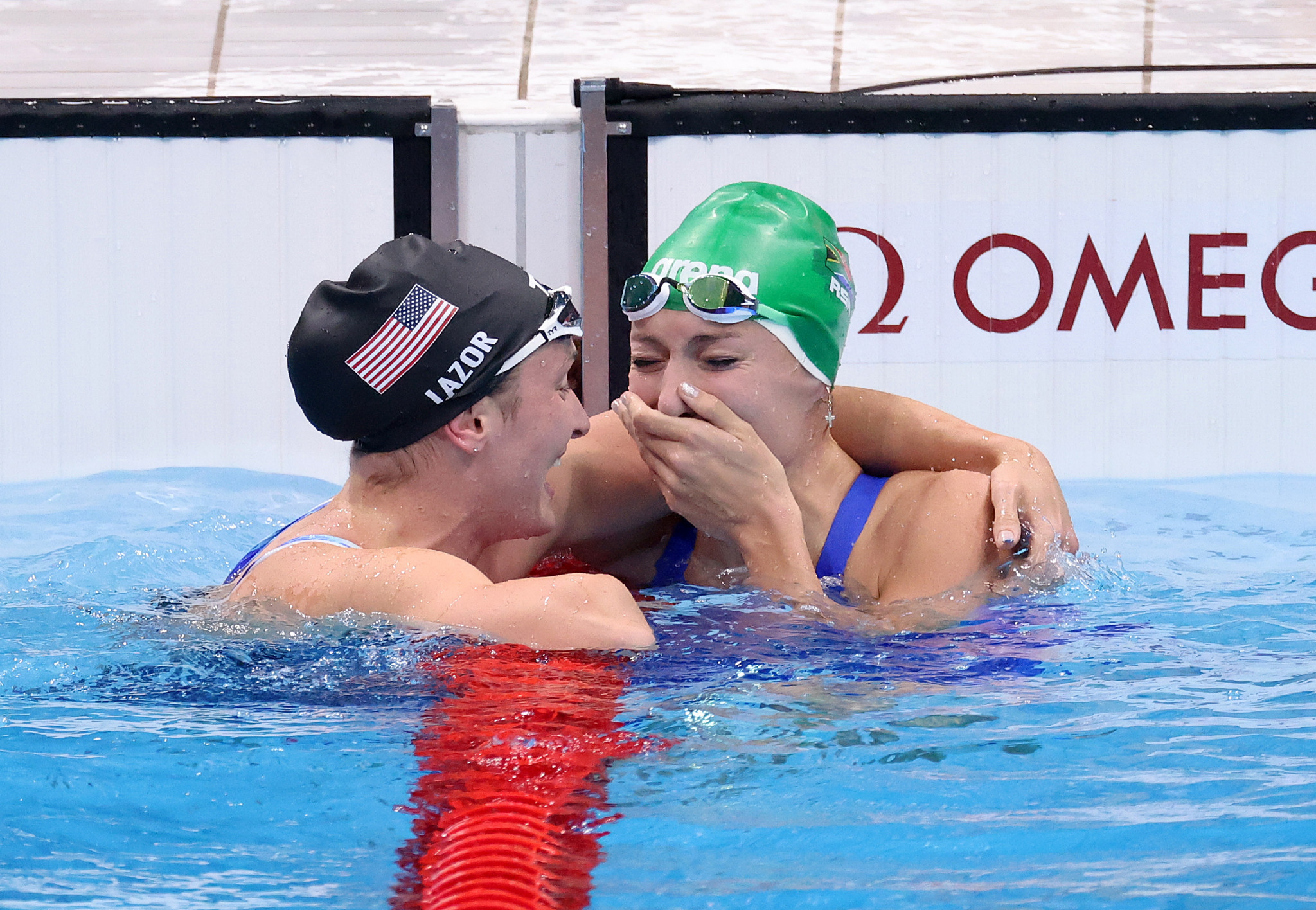 Tatjana Schoenmaker won the women’s 200 metres breaststroke title in a world record to secure the first swimming gold medal at these Games for South Africa on a day when Emma McKeown added Australia’s sixth gold with an Olympic record in the women’s 100m freestyle.

Schoenmaker was understandably overcome during the medal ceremony after lowering the world record she had missed by 0.05 seconds in the heats to 2min 18.95sec.

In so doing she maintained a proud South African record in breaststroke racing, emulating the victory in this event at Atlanta 1996 by compatriot Penelope Heyns.

While she has not quite managed to match Heyns’s 100 and 200m breaststroke winning double, the 24-year-old from Johannesburg has had a stellar Games, having won silver in the shorter of those distances.

Lilly King of the United States, who won bronze in the 100m breaststroke here in defending her title, did all she could to thwart the South African’s ambition, moving into an early lead, but she could not sustain it and eventually took silver in 2:19.92, with bronze going to her colleague Annie Lazor in 2:20.84.

"I feel like it hasn’t really sunk in yet," Schoenmaker said.

"If I had finished first or last in that race I would have been able to walk out with such peace, knowing I gave it my all."

McKeon lived up to her billing as favourite by winning the women's 100m freestyle title in an Olympic record of 51.96sec.

Bronze went to McKeon's team-mate and Cate Campbell, the Australian co-flag bearer at the Opening Ceremony, who finished in 52.52 ahead of Canada's Penny Oleksiak, who recorded 52.59.

Sarah Sjöström of Sweden, who set the world record for this event in 2017, finished an honourable fifth in 52.68, having only resumed swimming last month following an elbow injury that prevented her defending four European titles earlier this year.

"I still can’t believe I’ve just won a gold medal," said McKeon, before adding, with reference to her home town of Wollongong in New South Wales: "The emotions will really come out when I get back to Wollo."

Meanwhile Haughey, who has a Hong Kong mother and Irish father, commented: “This is crazy and surreal.

"The 200m freestyle is always my main event, so this is just a bonus."

Wang Shun was fastest qualifier for the men's 200m individual medley and won it in an Asian record of 1:55.00 having dominated the race from the start.

Britain's Duncan Scott added another silver to the one already secured in the men's 200m freestyle having tracked his Chinese rival all the way without quite being able to head him.

Japan's Daiya Seto, who began these Games with such high hopes, faded from medal contention in the closing stages, finishing fourth in 1:56.22 as Canada's Jeremy Desplanches came through to take bronze in 1:56.17.

This race marked the end of an illustrious career for Hungary’s László Cseh.

Wang Shun revealed that he had been partly inspired by a letter written to him by his mother.

"She said a lot of things to encourage me to perform well in these Games, and not to have a big burden on myself.

"[It was also} to motivate me to perform better in the future.”"

Speaking about his preparations for Tokyo, he added: "The most difficult period was during the pandemic.

"This caused an imbalance between my mental and physical health, but luckily I did get the medal [today].”

"The times at this meet, and in an Olympic final almost go out the window for me.

"It's a massive personal best again: I've dropped over a second and a half in this event this year, and I'm still learning it a lot.

"But just not enough, again."

Rylov won his second gold of these Games in an Olympic record of 1:53.27 having led from the start.

Ryan Murphy of the United States and Britain's Luke Greenbank pushed hard before finishing as silver and bronze medallists in 1:54.15 and 1:54.72 respectively.