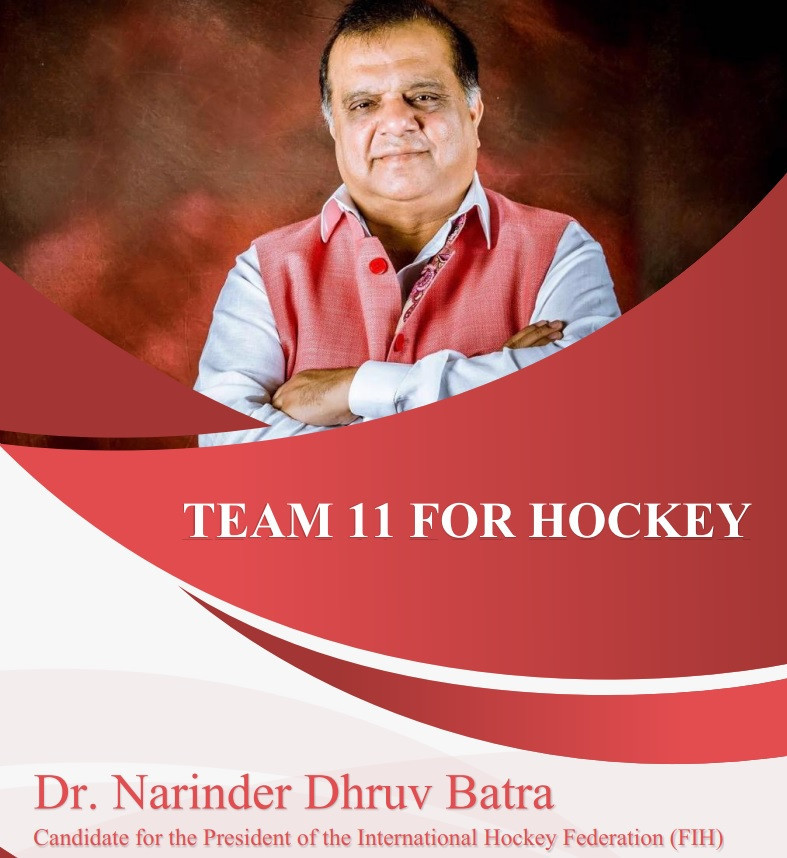 International Hockey Federation (FIH) President Narinder Batra has unveiled the 11 key targets he has pledged to achieve if he is re-elected to the position next week.

Batra, seeking a second term at the helm of hockey's worldwide governing body, has published a manifesto entitled "Team 11 for Hockey" prior to the election at the FIH Congress next Saturday (May 22).

The Indian official is being challenged by Belgium's Marc Coudron in the election, due to take place remotely after the FIH abandoned plans to stage a hybrid Congress in New Delhi because of the COVID-19 crisis.

"Enhancing financial sustainability", increasing the visibility of the sport and starting to work with esports and gaming platforms are among the main aims set out by Batra in his manifesto.

Batra, whose first term was extended after the FIH postponed the Congress to this year, said his "number one priority" is to develop the sport and has also vowed to "harmonise" hockey's global calendar and improve the sport's Olympic status.

Repairing the FIH's financial problems is likely to be the top item in the in-tray of the winner of the election.

The FIH's recent financial difficulties have largely been caused by a combination of launching a new global tournament - the Hockey Pro League - and the coronavirus pandemic.

The accounts, which predate the COVID-19 crisis, said TV production costs for the Hockey Pro League "were underestimated while, at the same time, revenues from broadcasting deals were overestimated".

"I believe that it's very important for us to develop media (digital + broadcast) rights as a strong source of revenue," Batra writes in his manifesto.

"This added to sponsor revenues are capable of leading us to the path of healthy sustainable financial stability."

Under the heading of "innovate", Batra admitted hockey "needs to reach a wider audience through different mediums".

"E-sports and gaming are developing at a fast pace and Hockey has to find its place among the  core sports that the developers are considering to integrate onto their platforms," Batra added.

Batra has cut a controversial figure at times during his reign as FIH President and has been accused of not dedicating enough time to the position.

His critics believe he has prioritised his role as President of the Indian Olympic Association - which is linked to his IOC membership.

"I hereby commit to engage all necessary efforts to fight the challenges coming our way and seize every opportunity to grow hockey, both in terms of participants and fans, as this is so crucial to generate the resources we need to make our sport flourish," Batra said.

"I commit to do so by continuing the spirit of dialogue which has to prevail in all our proceedings, therefore maintaining the unity of the hockey family, which is so crucial to the success of our organisation."

The winner of the election will serve as President until 2024 after the FIH shortened the second term from four years to three following the postponement of the Congress.