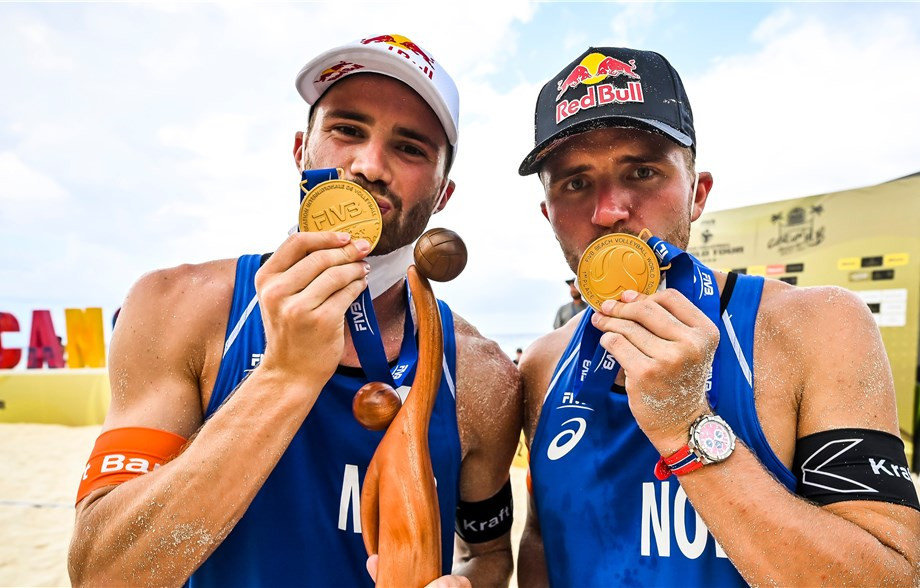 Mol and Sørum won against the Qatari pair again in straight sets 21-18, 21-18 at the 4-star tournament at the Playa Delfines in Mexico.

The world number ones won all 12 of their matches over the last 10 days, with their two Cancún golds taking them to 12 victories as a duo.

Cherif and Ahmed won silver for the second tournament in a row.

"I was so tired, but Anders played some really good volleyball.

"He played against the Qataris, myself and the heat and still beat the four of us.

"I'm really happy to have him by my side and we wouldn't have won if it wasn't for him."

The pair are set to skip the third and final FIVB Beach Volleyball World Tour tournament in the hub and will instead go to Tenerife in Spain for a training camp ahead of the Continental Cup in Madrid.

Brazil's Alison Cerutti and Alvaro Filho completed the podium with a 21-17, 21-17 victory over Italians Adrian Carambula and Enrico Rossi in the bronze medal match.

Brazil topped the women's podium for a second tournament in a row, except this time it was Rio 2016 Olympic silver medallist Agatha Bednarczuk and Eduarda "Duda" Lisboa, following their 21-15, 21-19 win over Russians Nadezda Makroguzova and Svetlana Kholomina in the gold medal match.

The pair claimed gold after winning bronze in the first Cancún event.

"She was aggressive from the first side out and she was the best player in the match.

"It makes me really happy that we got to be on the podium for the third tournament in a row, it's really important for us and show our evolution."

April Ross and Alix Klineman of the United States, who won the first 4-star tournament of the year in Doha; defeated Dutch veterans Sanne Keizer and Madelein Meppelink 21-17, 21-17 in the bronze medal match.