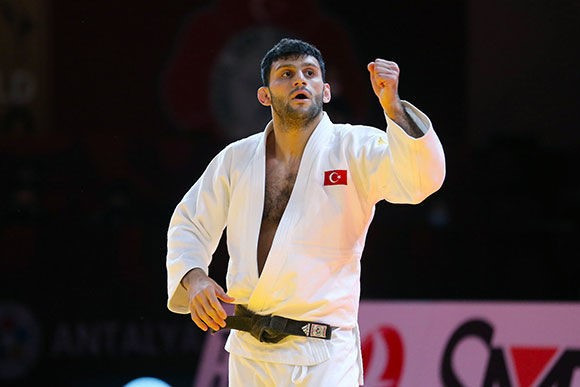 Host nation Turkey claimed their first gold medal of the International Judo Federation (IJF) Antalya Grand Slam in the final category of the day thanks to Vedat Albayrak.

Albayrak took gold in the men’s under-81 kilograms category after beating Christian Parlati of Italy, a winner at the recent Tashkent Grand Slam.

The first of the bronze medal contests went to Murad Fatiyev of Azerbaijan who scored a waza-ari courtesy of an o-goshi to defeat Italy’s Antonio Esposito.

The first category of the day to be decided was the women’s under-63kg, with Britain’s Lucy Renshell claiming her first gold medal at a Grand Slam event by defeating Venezuela’s Anriquelis Barrios.

A closely fought contest went all the way to golden score, with Renshell securing victory in the second minute of the extra period thanks to a left kouchi makikomi to register a win by waza-ari.

In an all Chinese contest one of the bronze medals went to China’s Jing Tang who beat compatriot Junxia Yang, after Yang retired with an injury when she was already trailing by a waza-ari.

The first bronze medal contest saw 2020 European champion Victor Sterpu of Moldova claim victory in the dying seconds of regulation time thanks to an utsuri-goshi to defeat Adam Stodolski of Poland.

The second bronze medal went to Arthur Margelidon of Canada who beat Tommy Macias of Sweden with a ko-soto-gari to claim an ippon a minute into golden score.

In the women’s under-70kg category, gold went to Kim Polling of The Netherlands who produced a dominant display featuring a reverse seoi-nage and an uchi-mata to score two waza-aris and beat Croatia’s Barbara Matic.

The first bronze medal contest saw victory go to Elvismar Rodriguez of Venezuela who beat Gulnoza Matniyazova of Uzbekistan courtesy of a waza-ari during golden score.

Bernabeu did not have the contest all her own way and was forced to wait for the second period of golden score before sealing victory courtesy of an ippon.

Prior to the second day of finals action a short Opening Ceremony took place to welcome competitors to Antalya.

Among the speakers was International Judo Federation President Marius Vizer who said in his address: "I want to thank the Turkish Government, the Governor of the Antalya Region, the National Olympic Committee, the Turkish Judo Federation and the local authorities for organising the event in a difficult period of time for everyone.

"We are all crossing this time together and sport remains a good way to bring hope, to be a model and a motivation for the whole of society."

Action is scheduled to conclude tomorrow with medals up for grabs in the women’s under-78kg and over +78kg and the men’s under-90kg, under-100kg and over +100kg.